Helen Guthrie was born September 2, 1861, in Zanesville, Ohio to Stephen Hand Guthrie and Mary Annette Guthrie. Mr. Guthrie owned a coal mine and manufactured salt and Mrs. Guthrie was the president of the Zanesville Female Seminary. According to Helen, her father worked with the Beecher family to help abolish slavery and was a firm supporter of the Union. Helen graduated from the same seminary that her mother presided over before completing “special work” at Stanford University, University of California-Berkeley, University of Nevada, and the University of Missouri. She married Walter McNab Miller on January 10, 1889 in San Francisco. Helen accompanied her husband to Europe where she spent three years studying in Prague, Leipzig, Paris, and London while he completed his pathological studies. Mr. Miller was a professor of Bacteriology at the University of Missouri and perhaps inspired his wife to work for several public health organizations. Helen Guthrie Miller was active in politics until her death on June 22, 1949, in Columbia, Missouri.

Helen was a chairman of the Pure Food Commission in Missouri from 1904-08, chairman of the Pure Food committee in the General Federation of Women's Clubs, and served in various roles in other organizations that dealt with issues ranging from tuberculosis to mental health. Along with a University of Missouri professor, Helen set up a display of adulterated foods at the state fair in Sedalia along with a purposed pure food law for Missouri. She was successful and the bill was passed despite opposition from the dairy industry.

But Helen's most prominent public activities were centered on her work for the national woman's suffrage movement. On the national level, she was the first vice president of the National American Woman Suffrage Association (NAWSA) serving under Carrie Chapman Catt. One of her first tasks was setting up the national headquarters in Washington D.C. in a “beautiful old embassy house.” From this base of operations, the NAWSA began to curry favor with prominent politicians and their wives. In her home state of Missouri, Helen was twice elected president of the Missouri Woman Suffrage Association (MWSA). Members, including Helen, went from town to town in an attempt to gather 23,000 signatures to put women suffrage on the ballot in Missouri. While ultimately the vote failed, it showed that real support for suffrage existed in the state thanks to efforts of Helen and her fellow suffragists. The MWSA was instrumental in convincing members of the Missouri state legislature to sign the Presidential Suffrage bill, which would allow women to vote in the 1920 presidential election. On the day of the vote in the senate, an express train from St. Louis to Jefferson City allowed a pro-suffragist senator to make it in time for the vote effectively securing the vote for the suffragists. Helen was present at the signing of the bill by Governor Fredrick D. Gardner and her name is inscribed on a bronze tablet in the capitol commemorating the moment. 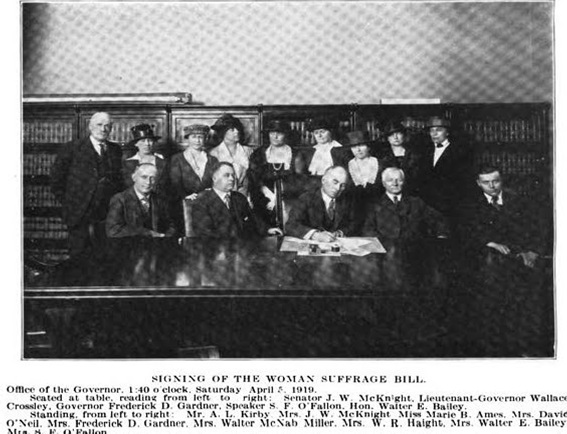