Henrietta Briggs Wall was born in Medina, Ohio, in 1849 to Daniel Briggs and Julia Wollcott. She married Daniel Wall, and the pair moved to Hutchison, Kansas, in 1886. They set up the first dry goods store in the city, which they ran as joint partners, and later a carpet house. Wall died in 1901, and Henrietta died in Hutchison on 2 May 1930.

Henrietta was active in the Kansas WCTU, and sent a letter to the Summit County Beacon in 1882 announcing the founding of a 'Department of Franchise' within the WCTU. In 1902, she was a member of the Kansas delegation to the national convention for woman suffrage in Washington.

Henrietta's best-known suffrage effort was the commission of a painting, "American Woman and her Political Peers." 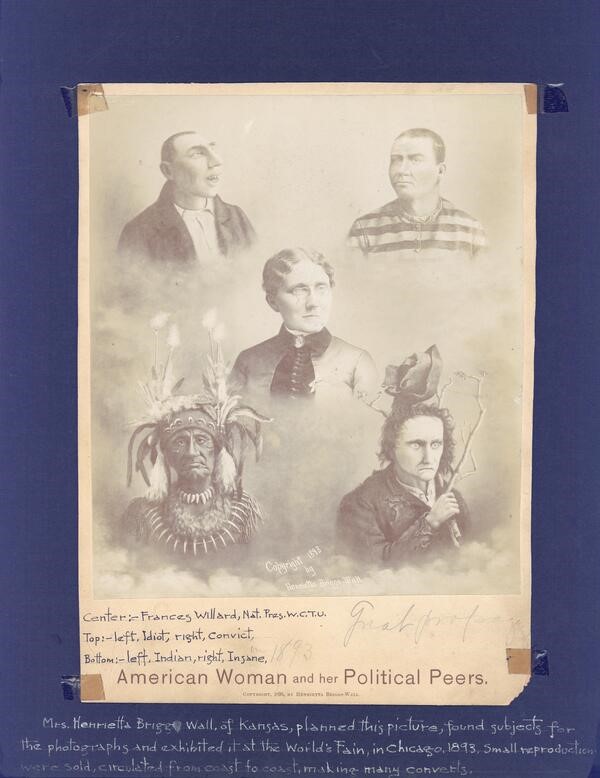 It depicts the face of Frances E. Willard surrounded by unflattering renditions of a mentally disabled man, a convict, a psychiatric patient and a Native American man. According to a report in the Marion Star it took Henrietta several years to produce, due to difficulties in finding suitable models. She first exhibited the painting at the World's Columbian Exposition of 1893 in Chicago, suggesting it was aimed to shock the public: "It strikes the women every time. They do not realize that we are classed with idiots, criminals and the insane as they do when they see that picture. Shocking? Well, it takes a shock to arouse some people to a sense of injustice and degradation." The painting attracted significant attention, including a discussion by the Englishwoman's Review, and was reproduced in several newspapers. Photographic reproductions were available from various selling points in Chicago and from Henrietta directly.

In the 1910s, Henrietta sold and distributed suffrage postcards of the painting, a collection of her suffrage songs, and other pamphlets such as "Gee-Gee's Catechism." She visited different cities in Europe and America during this decade, occasionally sending back reports on the women's political activities there. In 1919, she took part in a watchfire demonstration in Washington, where she burned Woodrow Wilson's July 4 address, in which he said: "Liberty does not consist in mere general declarations of the rights of man. It consists in the translation of these declarations into action."

From 1917 onwards, Henrietta campaigned to celebrate the "civic birthday" of new American citizens who had become naturalized or enfranchised that year on Independence Day. This later became known as the "New Patriot Plan." In 1921, the Akron Beacon featured her reasoning behind such a ceremony: "In other countries, much ado is made over the crowning of kings and queens who attempt to rule over the others. There is much more occasion for rejoicing when newly enfranchised citizens attain to their share in the honors and duties of self government."

"American Woman and her Political Peers." Available at: https://www.kshs.org/kansapedia/american-woman-and-her-political-peers-painting/10294, consulted 16 May 2018.