Mattie Adelle Nicolas Shaw was born to John and Eudora Shaw in July 1867. She grew up in Big Rapids, Michigan. In her youth she spent many vacations with her aunt, Rev. Dr. Anna Howard Shaw in Massachusetts. These visits were most definitely influential in developing her interest in suffrage work as a young woman. In February 1893, Eudora Shaw passed away. This same year, Anna Howard Shaw gave a sermon to five thousand people at the World's Fair in Chicago.

There is very little information on the early years of Mattie A.N. Shaw's suffrage work. In these years she was known by her given name, Mattie A.N., but later changed her name to Nicolas, the namesake of her grandmother. While living with her aunt in Philadelphia, she met an English boarder, Samuel Fraser, whom she married in 1903.

Following their marriage, Samuel and Nicolas moved to Ithaca, NY where the earliest documents indicating her suffrage involvement confirm she was re-elected in 1905 as Recording Secretary of the New York State Woman Suffrage Association. Later, Nicolas and Samuel relocated to 22 Main Street Geneseo, NY. In 1908, they welcomed their only child, Rachel. Records indicate Nicolas continued her position of Recording Secretary until re-election in 1911.

Shaw Fraser passed away in her home in Geneseo on Sunday, November 14th 1943 survived by her husband, daughter and son-in-law.

The Story of a Pioneer by Anna Howard Shaw, D.D., M.D. with the Collaboration of Elizabeth Jordan (ebook) www.gutenberg.org

The Democrat and Chronicle https://democratandchronicle.newspapers.com 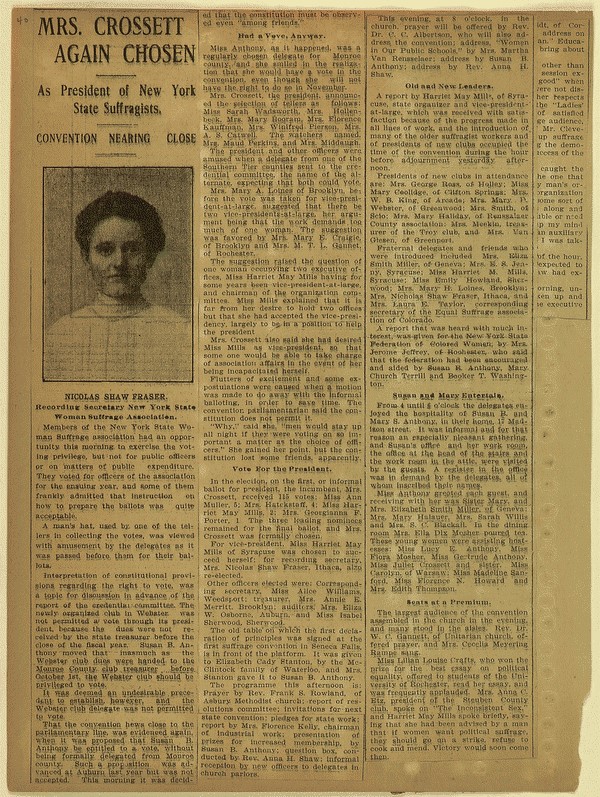