On February 28, 1917 the Washington D.C. Evening Star recorded the names of a few Minnesota visitors to the nation’s capital: "Six Minnesota women, headed by Mrs. Alden Potter of Minneapolis, joined the picket line today." Potter, the Minnesota State Chairman of the National Woman’s Party, came to D.C. to join other "silent sentinels" gathered to picket at the White House gates to urge the president to advocate for passage of the suffrage amendment. Potter stayed at the stylish Hotel Powhatan, a mere two blocks from the ongoing demonstrations in front of the White House. During this trip in late February George Harris photographed Potter amid her cohort, proudly grasping a Scandinavian Suffrage Association of Minnesota banner. 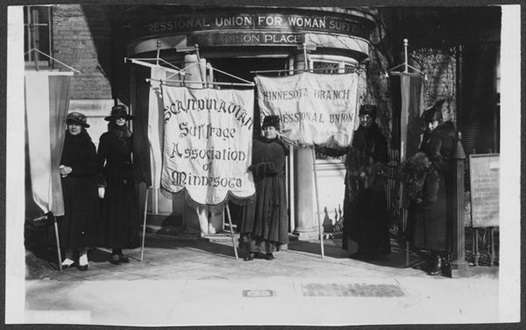 The February 1917 trip to the capital was not Potter’s first foray into suffrage organizing. Born in 1861, she began her involvement in the movement for women’s suffrage as early as 1910 when she served as the Committee on Education Chairperson for Minnesota’s branch of the National American Woman Suffrage Association. She wrote "generous checks" to the National Woman’s Party subscription fund, "to be used in the fight to procure the passage of the national suffrage amendment," and joined a "funding committee to secure maintenance money for the NWP headquarters." Additionally, she played a key role in the NWP’s movement to western cities, introducing a resolution in April 1916 to hold the NWP launching convention in Chicago that June. The resolution passed and the convention drew crowds on June 6-8, 1916. Potter attended and served as a special envoy for the event.

Potter’s work as a suffragist continued even after Minnesota’s day on the picket line in February 1917. In June that year she joined Barnard graduate and suffragist Beulah Amidon as a guest speaker during Amidon’s Minneapolis stop on her Minnesota speaking tour. Potter was a college graduate herself, earning a degree from the University of Michigan’s Literary Department in 1894. By the end of the 1917 fellow members in the National Woman’s Party elected Potter as a Vice Chairman of the National Advisory Council.

After national women’s suffrage was won, commemoration and celebration ensued. On February 18, 1921 Potter received the National Woman’s Party "Picket Pin" for her involvement in suffrage demonstrations. The five Minnesotan women who accompanied her in February 1917 also received pins. Though Potter passed away in 1929, her name graced a memorial banner for a suffrage remembrance parade in 1933. Today the banner is preserved at the Sewall-Belmont House and Museum in Washington, D.C.

Jane Bliss Potter’s birth year is listed as "about 1861" in the 1880 and 1910 federal censuses. She first appears in an available published source in the University of Michigan’s 1902 General Catalog of Officers and Students 1837-1901. Her later involvement as a militant suffragist and NWP member are heavily recorded in various Washington, D.C. and Minnesota newspapers between 1916 and 1921. A 1917 George Harris photograph of Potter and other picketers in front of NWP headquarters is held in the Library of Congress’s Records of the National Woman’s Party and is available on the Library of Congress website. A description of Potter’s early women’s suffrage activism in Minnesota appears in Proceedings of the Forty-Second Annual Convention of the National American Woman Suffrage Association. Information regarding the memorial banner housed at Sewall-Belmont House comes from the museum’s website and blog.