Ruth Astor Noyes was born in 1885* in Saratoga Springs, New York and grew up living with her aunt, Gertrude L. Darrow. By 1910, Noyes had moved with her aunt to Washington, D.C. and was working as a stenographer. She took an interest in the city's youth and served as secretary for the Washington Center of the Drama League, which opened the House of Play children's theater, and also organized children's parties and events to benefit the theater. She joined the National American Woman Suffrage Association (NAWSA) in 1911 but changed course after hearing the "radical" ideas of Alice Paul and Lucy Burns, becoming an organizer for their newly formed militant branch of the suffrage movement in 1913, the Congressional Union for Women's Suffrage (Congressional Union).

Noyes spoke at "street meetings" on behalf of the Congressional Union and their efforts to advance the Bristow-Mondell Federal amendment (aka Susan B. Anthony amendment, which enfranchised women directly by act of Congress) and oppose the Shafroth-Palmer Federal amendment supported by NAWSA (which made both State and Federal action necessary for enfranchisement). Noyes was in charge of orchestrating several major events, including the procession of 80 decorated automobiles starting from Hyattsville, Maryland, taking suffrage petitions collected around the nation to the U.S. Capitol, and a massive meeting in D.C. to greet the New Jersey delegation of 500 women who planned to call upon President Wilson. The meeting also served as the launch of the first issue of the Congressional Union's weekly journal, The Suffragist, and featured an address by Inez Milholland Boissevain.

As the regalia committee chairman for the procession of 10,000 suffragists on May 10, 1914 in D.C., Noyes rode back and forth along the lines of marchers to ensure everything went smoothly. She spent the summer organizing and campaigning throughout the Catskills resorts of New York by auto and horseback. In the fall, Noyes was sent with Doris Stevens to open the Denver, Colorado headquarters as part of the campaign targeting the states voting on suffrage that November. They made significant progress in just a few months: for the first time in the state's history, all three Colorado parties declared support for the Federal suffrage amendment.

After the election, Noyes organized and spoke throughout Illinois, Indiana, Kansas, and Pennsylvania, as well as back in D.C., where she addressed the first annual national convention of the Congressional Union. At least nine newspapers nation-wide referenced Noyes's participation in a suffrage pageant as "dancing on the steps of the Capitol" and quoted her as saying: "What if short skirts do show a woman's legs? Everybody knows we have legs. We want freedom in our walk and movement, just as we want freedom in other things in life."

In 1916, Noyes married Paul D. Crocker in Illinois. After having two children, Lynde and Paul N., Ruth Noyes Crocker's contribution to the movement was mostly as a dues-paying member and supporter. She died on February 6, 1944, from complications due to an accidental fall earlier in her home in Alexandria, Virginia.

* The birth year of 1885 is the average of the varying birth years reported in multiple census listings.

Noyes' suffrage work is documented in the archives of The Suffragist and Equal Rights (The Gerritsen Collection of Aletta H. Jacobs). Reports of her activities are in the following D.C. newspapers: Evening Star, The Washington Herald, The Washington Post, and The Washington Times. Newspapers citing her "legs" quote include: Chanute Daily Tribune, Jackson Daily News, The Levenworth Post, Lincoln Journal Star, News-Journal, The Republic, The Salina Evening Journal, The Times, and Wellington Daily News. Other newspapers covering her activism in D.C and across the nation include: Chicago Tribune, Jackson Daily News, The Rock Island Argus and Daily Union, The Sheboygan Press, The Sun, The Wichita Daily Eagle Sun, and Wilkes-Barre Times Leader. Her death is listed in the Virginia Death Records, 1912-2014 (Ancestry.com). 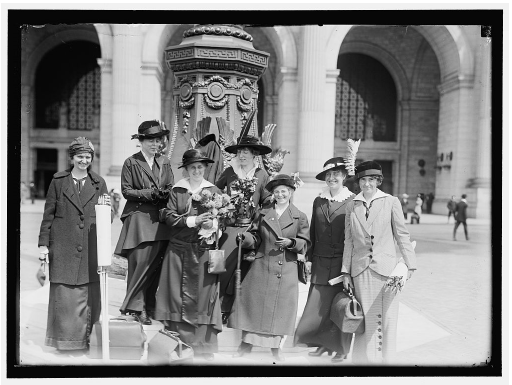