For five years Stuyvesant was also a very active social worker in New York City and worked closely with Margaret Sanger to fight for women's rights regarding birth control. She was also the treasurer, secretary, and one of the editors of the Birth Control Review, a magazine founded by Sanger. Stuyvesant was with the magazine from its beginning in February until May of 1917, publishing the first three issues. She was also involved in settlement work.

A member of the National Woman's Party, she worked as a state organizer. During the summer of 1917, Stuyvesant picketed the White House throughout the most violent period for suffragists in Washington, D.C. The purpose of the picketing campaign was to draw attention to President Wilson’s lack of support for a constitutional amendment for woman suffrage. On June 25, Stuyvesant was arrested with a number of others, but not charged. On July 4, she was again arrested; this time she and others were tried, convicted and given a choice of paying a fine for “obstructing traffic” or serving 3 days of jail time. All chose jail. In August, as violence from onlookers escalated, police did nothing. On August 14, she was the first person to carry "the Kaiser Banner." This day was one of the most violent days of picketing and on August 15 a soldier destroyed her flag, struck her, and her blouse was torn from her body. The next day on August 16, she was severely handled by the police. Police attacked the picketers that day "with as much cruelty as earlier mobs." Stuyvesant, Lucy Burns and Virginia Arnold were all injured.

There is little information on Stuyvesant after her involvement in picketing. She worked for the Socialist Party in 1917 for the election of a mayor in New York City. She also published an essay, "Staying Free," part of a 1920s series on the "Modern Woman," in the liberal magazine, The Nation, March 30, 1927, pp. 339-41. 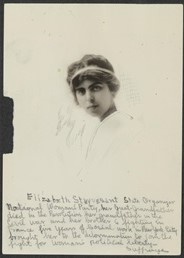 A photograph of Stuyvesant can be found online in the Library of Congress's collection "Records of the National Woman's Party," available at: https://www.loc.gov/item/agc1996007589/PP/