Edith M. Ainge was born in England in September 1874 to William and Susan Ainge. Her father worked as an accountant. Ainge immigrated with her family to North America in the early 1880s. It is possible they lived in Canada for some time before relocating to the U.S., as two of her brothers were born in Canada in 1883 and 1885. Ainge was the second oldest of nine children, including three younger sisters and four younger brothers. While in the U.S., Ainge completed all four years of high school. Ainge was an active suffragist, going so far as to state "suffragist" as her occupation on the 1920 U.S. Census.

Ainge served as national treasurer for the National Woman's Party and as a member of its National Council. In July 1918, Ainge attended the Republican State Convention in Saratoga, N.Y., at which she confronted Alice Hay Wadsworth, then president of the National Association Opposed to Woman Suffrage and the wife of Senator James W. Wadsworth. The actions of The Suffragists caused a "suffrage riot" to break out, during which a banner condemning Senator Wadsworth for not supporting women's suffrage was hung and promptly ripped down. In addition, Ainge travelled to Washington to picket with the National Woman's Party. She was a leader in the Watchfire demonstrations, being the first to light a fire in an urn in which suffragists burned speeches by President Wilson outside the White House on New Year's Day in 1919. Ainge was arrested for these actions. Overall, Ainge served five different jail sentences, including sixty days in Occoquan Workhouse in Virginia in September 1917, fifteen days in August 1918, and three shorter sentences in the District of Columbia city jail in January 1919 due to her actions in the Watchfire demonstrations. In February and March 1919, Ainge was part of a "Prison Special" tour, which travelled throughout the U.S. spreading the stories of women who had served prison sentences for picketing.

Even after ratification of the Nineteenth Amendment, Ainge continued fighting for equal rights for women. Through her work with the National Council of the National Woman's Party, Ainge helped write a proposal for an equal rights amendment to the U.S. Constitution. In 1923, Ainge accepted an invitation to be part of a delegation visiting President Calvin Coolidge to obtain action on the Equal Rights Amendment. Ainge never married. Living with her parents and siblings, she resided in Jamestown, N.Y. for most of her life. In 1933, she carried a picket banner reading, "Failure is Impossible" at the funeral of Alva Vanderbilt Belmont, who had been president of the National Woman's Party since 1917. In October 1948, Ainge died at her home in Western New York. She is buried in Lake View Cemetery in Jamestown, N.Y. Her gravestone reads, "Suffrage Leader." 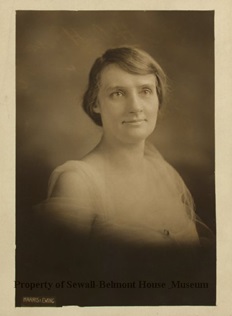 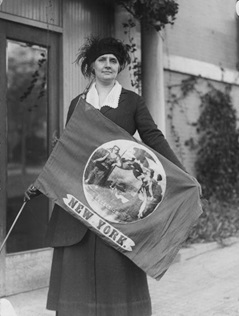 National Photo Co., Washington, D.C. Miss Edith Ainge, of Jamestown, New York, the first delegate to the convention of the National Woman's Party to arrive at Woman's Party headquarters in Washington, Miss Ainge is holding the New York state banner which will be carried by New York's delegation of 68 women at the convention meeting in Washington February 15th-18th. [Feb 1921] Image. Retrieved from the Library of Congress, http://hdl.loc.gov/loc.mss/mnwp.147004. 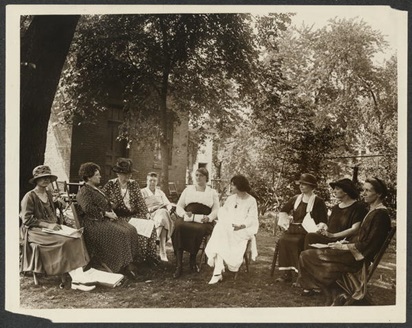