Edna May Buckman was born on Christmas Day in 1882, the daughter of Quakers May Begley and Charles Harper Buckman in Philadelphia, PA. She grew up in Germantown, a section of Philadelphia. Before the turn of the twentieth century, the Buckmans moved to Echo Dale, not far from Norristown, what would be their family home until the 1930s. As a ninth-generation Philadelphia-area Quaker, Edna attended Friends' Central, a Quaker secondary school in Philadelphia. She studied art at the Pennsylvania Museum and School of Industrial Art and met Wilmer Rhamstine Kearns in 1903. She married him in June 1904, after which they moved to New York City. Their first child, Serena, born in August 1905, was named after a Canadian Quaker, Serena Minard, a suffrage and human rights activist.

Edna Kearns served Quakers in New York Yearly Meeting in many capacities, including as publicity chair; she published articles about suffrage in the Hicksite Quakers' Friends' Intelligencer. She worked with Quakers to inform and educate community members about woman's voting rights. In 1910 Kearns joined the Equality League of Self-Supporting Women founded by Harriot Stanton Blatch.

Kearns organized suffragists on Long Island to sign petitions, march in parades, write their elected representatives, raise money for the cause, and she gave classes in canning and preserving food. She oversaw a controversial "Better Babies" program that attempted to link home and family to women's voting rights; met with representatives of an African-American church in Rockville Centre, NY; lobbied for suffrage legislation on the state and national levels; conducted study groups; and organized numerous cultural events, pageants, theatrical performances, and rallies. With friend Irene Davison, Edna and Serena Kearns demonstrated "silent speeches" on their visit to Long Beach, NY in July 1913 with the "Spirit of 1776" wagon under the auspices of the New York State Woman Suffrage Association.

In 1914 the Kearns family accompanied "General" Rosalie Jones and other suffragists on the "hike" to Albany, N.Y. As press contact during the 1915 and 1917 New York State suffrage campaigns, Edna Kearns wrote suffrage news columns for the New York Tribune and served as suffrage editor for the Brooklyn Daily Eagle, receiving press coverage from the New York Times. Her publicity photos were widely circulated in the news media, as well as news about the participation of her daughter as a suffrage poster child. Kearns attended state and national suffrage conventions and acted as a delegate to the 46th annual convention of the National American Woman Suffrage Association in Nashville, Tennessee in 1914, where she and others introduced soapbox street presentations to Nashville. The New York State Woman Suffrage Association honored Kearns with a special certificate recognizing her noteworthy contributions to the 1915 referendum effort.

A supporter of the Congressional Union, a branch of the National American Woman Suffrage Association, Kearns marched with the Quaker contingent in the March 1913 parade in Washington, D.C. She eventually joined the National Woman's Party founded by Quaker Alice Paul in 1916. Both she and her daughter picketed the White House in 1917. Kearns served as Long Island's congressional chair for the National Woman's Party during the campaign for the 19th Amendment. Edna Kearns was also active with the Women's Peace Society and served the International League for Peace and Freedom as a board member prior to 1920.

Edna's husband, Wilmer was a staunch ally of the women's movement. He marched in the men's division of suffrage parades in New York City and Washington, D.C. He worked with the Men's League for Woman Suffrage to raise funds and encourage support by male voters on the local, state, and national levels. He stayed home to answer the phone and correspondence, and he took responsibility for childcare when Edna Kearns attended suffrage meetings and conferences. He had reservations about the gains of the suffrage movement, as he believed that without a radical change in the social and economic system, true equality couldn't be achieved. Nevertheless, Wilmer Kearns continued his support of women's rights after Edna Buckman Kearns died from cancer in 1934. His caretaking of the "Spirit of 1776" horse-drawn wagon played an important part in the wagon's preservation, ultimately resulting in its placement in the permanent collection of the New York State Museum in Albany, N.Y.

Marguerite Keanrn has prepared a podcast on her work on the woman suffrage movement on Long Island. You can access it here. [LINK to https://www.longislandhistoryproject.org/marguerite-kearns-and-an-unfinished-revolution/] 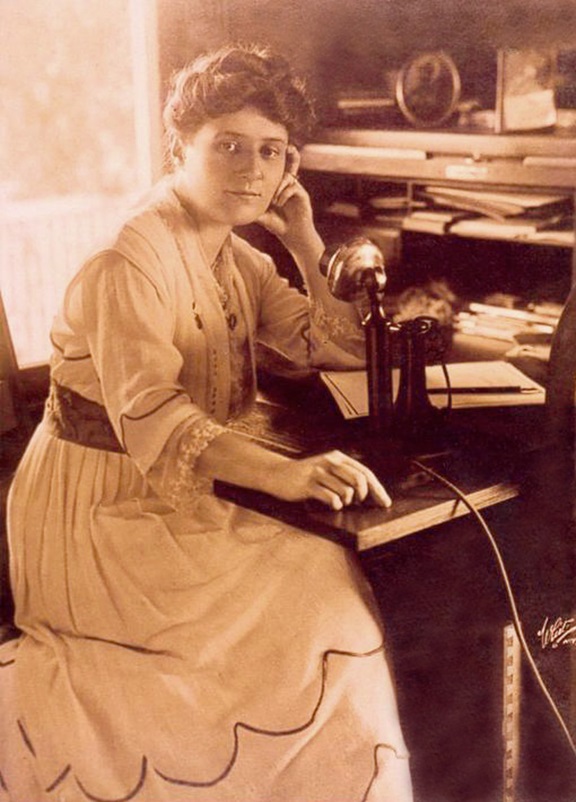 Edna Buckman Kearns in her home office in Rockville Centre, New York, circa 1915. Online at https://en.wikipedia.org/wiki/Edna_Buckman_Kearns 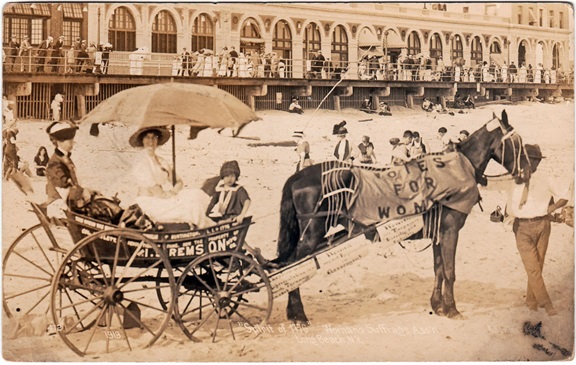