Edna Augusta Dixon was born in 1894 to Henry M. Dixon and Chorrelis H. Dixon in the District of Columbia, where she lived her entire life. She was class president of the James Ormond Wilson Normal School, and graduated in June 1914. She attended George Washington University, where she played leading roles in Drama Club productions and taught second grade while attending the university. After graduation, she worked as a teacher and never married.

Edna Dixon was among the Silent Sentinels who picketed President Woodrow Wilson’s White House from January 1917 to June 1919. At 23 years old, she was one of six women arrested on August 17, 1917. The other women were Lavinia Dock, Pennsylvania; Lucy Ewing, Illinois; Natalie Gray, Colorado; Catherine Flanagan, Connecticut; and Madeleine Watson, Illinois.

Since January 1917, the suffragists had been protesting the White House with silent protestors who carried banners. For three days prior to Dixon’s arrest, young soldiers, who were at times aided and abetted by the police, had been attacking the women. They grabbed the picketers, tore off their sashes, dragged them in the streets, and destroyed their banners. Each time a woman was attacked or her banner taken, two more silent protestors with fresh banners exited Cameron House and crossed the street to the White House.

Dixon was one of six women arrested on August 17 and brought to trial for obstructing traffic. After a 40-minute trial, all six were fined $10 or 30 days, and all refused to pay the fine because it would entail an admission of guilt. One reporter said that most of the women were “close to teary,” “dramatic,” and “emotional,” all but Dixon, who was the “only one of the six who seemed to be in possession of her wits.”

“Judge Pugh, I am personally working every day for my country in its war for democracy,” Dixon told the judge in her defense. “But if we win the war, as of course we shall, it is not my belief that democracy will be safe in Europe or in other countries as long as the vote is withheld from women in this country. I believe that I was acting strictly within my individual right when I was arrested by the police.”

Judge Pugh saw it differently, and told the six women, “You are not picketing peacefully. You are only advertising yourselves.” Several reporters accused them of “flaunting” their banners, and Senator Meyers of Montana said the women had performed “outrageous, scandalous, and almost treasonable actions” that were an “insult to the President and the people of the United States.”

On the day of the trial, the judge sent the six prisoners to Occoquan, a government workhouse in Lorton, VA. The following day reporters could view the prisoners, but not talk to them. One reporter described the prisoner’s attire as if the women were at a social. “Clad in the regulation grey-and-white striped uniform…they do not look half bad.” Dixon reported to her mother that the uniforms were “brand new, and evidently made in anticipation of their arrest.”

Edna was the only local suffragist, and therefore the warden allowed a visit from her mother, Chorrelis H. Dixon. Her mother told reporters that she was proud of her daughter. The Cameron House declared that the women in jail had not broken any laws, but had decided not to file an appeal because an appeal could take up to six months, during which time the women would be required to remain in jail. The Cameron House sent word that the picketing of the White House would continue, and it did.

On the third day, a newspaper reported that Dixon complained to her mother that “negro and white women at the penal farm were required to drink from the same cup.” Whittaker denied the charge, saying that white women have one bucket and “negro” women another. Another newspaper wrote that the suffragists were as far removed from the “colored prisoners” as possible, a disturbing reminder that the fight for women’s rights did not include all women.

By the thirteenth day, Dixon and five other suffragists were suffering ill health due to malnourishment. Newspapers had been reporting for some time that the food at Occoquan was unpalatable. The meat was rotten – when there was meat – and the cornbread often had worms.

After 25 days in the workhouse, when the women worked in the sewing room and gardens, the six prisoners were released five days early for good behavior on Tuesday, September 11, 1917. The Cameron House gave a dinner to celebrate their return, and continued to picket the White House. As Dixon left Occoquan, 11 more women were in the first week of serving a 60-day sentence. On November 14, 1917, 33 protestors were beaten and tortured by guards and Warden W.H. Whittaker on what came to be known as the Night of Terror. In March 1918, the D.C Circuit Court of Appeals ruled that the arrests, trials, and punishments of the suffragists were unconstitutional.

Ten months after she was released from jail, Dixon graduated from George Washington University with a degree of Bachelor of Arts and Bachelor’s Diploma in Education. In 1922, Dixon served on a committee advocating that teachers be rated by their teaching ability rather than their personalities. She also served at the head of a committee on teachers’ leaves, and recommended more rights for substitute teachers.

Edna A. Dixon died at 30 years old on 29 November 1924, working as a teacher and living on her own. Edna was found dead by a neighbor on November 24, 1924, as a result of gas escaping into her apartment from her stove. The death was ruled as accidental. She is buried at Rock Creek Cemetery in D.C.

"School Board Action: Everything in Readiness for Resumption of Studies," The Washington Post, Saturday, September 19, 1914, p. 11.

Edna Dixon played the leading role in Disraeli and scenes from Victor Hugo's Les Misérables as a member of the George Washington University Dramatic Association. Photo is from The Washington Times, Sunday, May 7, 1916. 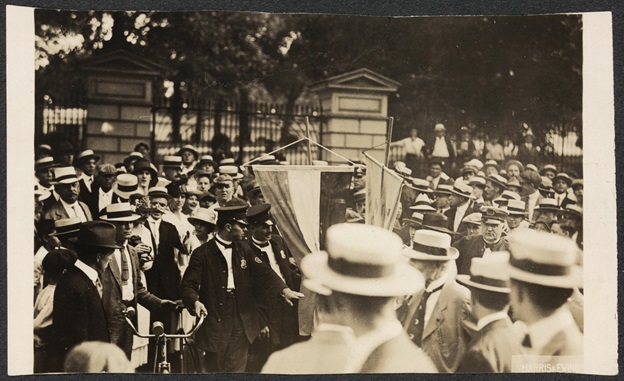