Isabella Mott was born to Lillas Amoret Baker and Frederick Gates Mott on August 28, 1886 in Bouckville, New York. She completed two years of college and, in 1910 lived with her parents in Hamilton, New York. Isabella Mott was a significant contributor to the women's suffrage movement, helping women activists fight for what they believed was right.

Sometimes criticized as a society woman, Isabella Mott traveled extensively around the country for women's suffrage. She joined the New York branch of the Congressional Union, and also traveled as an organizer for the District of Columbia as early as 1915. She was appointed to this position when she went to Washington in the hopes of assisting with the efforts of the Congressional Union. She began lobbying New York State representatives in the legislature that year, but returned to New York since so many were "absentee statesmen." Mott campaigned for boycotting the Democratic party, often working side by side with Alice Paul, and stating "We propose to defeat the Democratic party in the Democratic states unless it favors our petition." She continued working with the National Woman’s Party when the organization separated from the National American Woman Suffrage Association in 1916.

Newspapers noted her presence in various cities in Rhode Island, Maryland, Ohio, and Pennsylvania when she arrived to speak about the importance of passing a federal amendment enfranchising women. In December 1915, Mott joined the delegation of suffrage leaders that President Woodrow Wilson received at the White House. Mott also picketed the White House with her friend Elizabeth White Colt in January 1917.

In September 1916, Isabella Mott married Charles L. De Angelis. In 1930 and 1940 the couple lived in Utica, NY, and had no children. In both of these years Charles worked as a lawyer.

Isabella Mott is not mentioned in Doris Stevens, Jailed for Freedom (New York: Boni and Liveright, 1920). 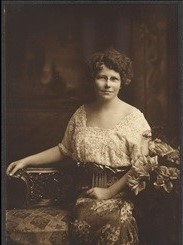 The caption here is curious because volume 6 of History of Woman Suffrage refers to this suffragist as Miss Isabella Mott and census links after her marriage refer to Mrs. Isabella De Angelis.

The Sophia Smith Collection has a photograph of Isabella Mott with Eleanor Garrison, with both women wearing suffrage sashes: https://www.smith.edu/libraries/libs/ssc/atg/popupgarrison4.html. 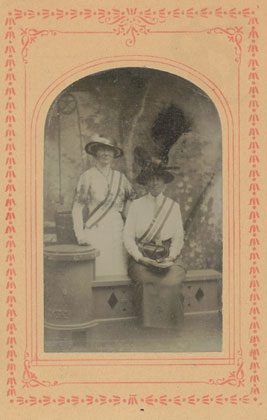 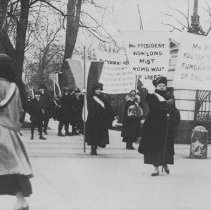