Elizabeth Minnie Huff was a white female born January 28, 1891 in Nebraska. She eventually moved to Des Moines, Iowa. Her father, Luther Sherman Huff (1867-1935), was born in Iowa and her mother, Martha Huff (1858-1956), was born in Illinois. She had an older brother named Earl and a younger sister named Eunice Huff. In 1914, Elizabeth worked as a teacher in Taylor County, Iowa, having gone to college for two years. Elizabeth worked for the War Department and the Red Cross during World War I, which brought her to Washington, D.C. There she became involved in the suffrage movement.

In 1919, she was arrested, along with twenty other women of the National Woman's Party, for participating in the Watchfire demonstration in front of the White House. Her sister Eunice, also working for the War Department, was arrested later as she cheered Elizabeth and the other women on in court. Elizabeth was sentenced to five days in jail, her sister to three.

Her local newspaper, Webster City Freeman, published the following account of her arrest:

It is said that Miss Huff is huffy over her arrest but she should have known better. If she must burn the president's speeches, she ought to burn them in a cook stove in her kitchen, if she has one, and if she has none, she ought to get one. That might cure her of the bad habit she seems to have contracted.

After the war, Elizabeth returned home to Des Moines. In 1922, she married Charles Fay Johnson, also from Des Moines. Charles had served as corporal in the U.S. Army during the war. Before her marriage, Charles worked as a clerk for the railroad in 1930, and Elizabeth worked as a homemaker. Elizabeth's parents resided with her young family just after the birth of her son, William E. Johnson, in 1929 and before the birth of her daughter, Carolyn Johnson, in 1931. Her husband Charles died in 1977 and Elizabeth died in 1989. 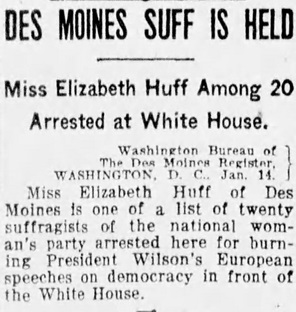