Lucille (also Lucile or Lucia) Agniel Calmes (b. May 29, 1886) was one of six children born to George (b. 1849) and Ada Lescher Agniel (b. 1859) in Indiana. George Agniel, a farmer, died in 1893, leaving Ada Lescher Agniel to raise Lucille and her five siblings - sisters Rosamond, Marguerite, and Mary, and brothers George and Vivian - on her own. All of the Agniel children attended school.

By 1915, Lucille Agniel was living in Washington, D.C., where she married William Burgess Calmes, a clerk at a tire store, at the age of 29. Her husband registered for the draft in 1917 and claimed an exemption due to his wife and child, most likely their daughter Patricia. Calmes had a busy social life in D.C., her name appearing in the society pages of the local newspapers as she hosted members of her sewing and fancywork clubs.

Calmes was one of the National Woman's Party activists who were at once vilified and applauded for protesting in front of the White House during WWI. She was arrested after participating in the watchfire demonstration on January 13, 1919. In the "Watchfires of Freedom" protests, suffragists burned President Woodrow Wilson's WWI speeches about democracy, deemed hypocritical in light of Wilson's earlier refusal to support the federal amendment granting women the right to vote, in cauldrons in front of the White House. Calmes and the others arrested that day spent five days in jail.

Calmes was awarded the "Jailed for Freedom" pin, crafted in silver and fashioned as a prison door with a heart-shaped lock, after her arrest. Alice Paul created the pin specifically to honor those NWP pickets who were arrested. Both Alice Paul's and Lucille Calmes's pins are in the collection of the Smithsonian. 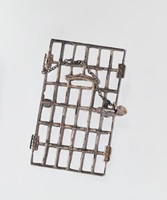 (Photo Courtesy of The National Museum of American History at the Smithsonian. Source: http://www.langantiques.com/university/Suffragist_Jewelry)

After four years of marriage, and only months after her arrest, Calmes filed for divorce in June 1919. Her husband had been ejected from a hotel where he registered with another woman he claimed to be his wife. She sued for absolute divorce and custody of her daughter. As she is listed as head of household for numerous years thereafter, it appears she never remarried. Over the years, Calmes worked for different agencies of the federal government as a clerk and stenographer, including a position with the Veterans' Administration as late as 1940. She rented homes in D.C. where her daughter and mother lived with her, and she also leased rooms out to other women who worked for the federal government. In the years immediately after her divorce, she invested in real estate in D.C.

Later in her life, Calmes copyrighted a song titled "No Tears." Calmes died on October 10, 1963 at the age of 77, and is buried in her hometown in Indiana.

A photograph of Calmes is available at:

Doris Stevens. Jailed for Freedom. (New York: Boni and Liveright, 1920), pp. 305-13. A photo of Calmes appears in unnumbered pages just before the appendices.