Mary Dudley Hussey was born in New York City in 1853. She was the daughter of William Howland Hussey and Cornelia (Collins) Hussey. The first woman to receive a medical diploma in the United States, Dr. Elizabeth Blackwell, attended Mary Hussey's birth. Mary Hussey had two brothers, Frederick Kempton Hussey (born June 14, 1856) and Dr. George Benjamin Hussey (born March 10, 1863). Mary Hussey descended from Quakers on both her maternal and paternal sides. On her maternal side, Mary Hussey is a descendent of a prominent New Jersey family, the Collins family. Mary Hussey's mother served as vice president of the New Jersey chapters of both the American and the National Women Suffrage Associations.

Dr. Hussey was an ever present and very familiar face in the early suffrage movement in New Jersey. Ironically, due to travel obligations and a lack of registration, she lost her right to cast a vote in the first election after the Nineteenth Amendment was adopted in 1920. Dr. Hussey was unregistered at the time and had been traveling in California, not returning to New Jersey until Election Day. On a happier note, Dr. Hussey cast her first vote the following year, at the same time she was running for Assembly on a single tax ticket. The single tax system was an important theme in much of Dr. Hussey's work.

Dr. Hussey graduated with a physician's degree in 1877. She received her M.D. from Woman's Medical College in New York City. While she was a medical student, she joined the New York Committee of the Prevention of the State Regulation of Vice. She later studied law at New York University in New York City and received her law degree in 1898. According to an October 26, 1927 article, in 1898 she also initiated the New Jersey Legal Aid Society, in which she remained active for 20 years. According to this same article, before development encroached too significantly on her property, Dr. Hussey regularly held parties and meetings in support of the campaign and her work on her property's expansive grounds. Dr. Hussey organized the Women Lawyers' Club of New York out of her home. According to news reports of the time, many considered Dr. Hussey a "direct successor of Lucy Stone and Antoinette Brown Blackwell."

Dr. Hussey was also an avid gardener and was known to provide "suffrage iris bulbs" for gardens throughout New Jersey. As a condition (and, notably, the only condition) of her gift, Dr. Hussey asked that the recipient grow their own flowers and then sell them in order to support the New Jersey campaign. In a 1916 letter responding to an invitation to be a guest of honor at an Albany convention honoring suffrage pioneers, Dr. Hussey set forth, in remarkable detail, her initial connection to the suffrage movement. In an October 26, 1997 article Dr. Hussey is described as attending a New York City convention where she heard another woman (most likely Lucy Stone) state that women should have the right to vote. According to this article, Dr. Hussey described her reaction as "Why not?" and had been a suffragist ever since.

An October 26, 1927 article describes Dr. Hussey's first work for the cause as involving a collection for Lucy Stone at a Newark convention in 1868. In the referenced letter, Dr. Hussey refers to a "little bicycle" that she had "ridden for 20 years with a bag full of leaflets." According to this same article, this "little bicycle" made Dr. Hussey "one of the most familiar persons on the streets of the Oranges." Dr. Hussey is said to have refused to use an automobile and abandoned her bicycle only after the traffic made it next to impossible for her to safely ride throughout town.

Dr. Hussey was an active speaker and a valued member of a number of organizations. A December 13, 1923 newspaper article highlights a talk given by Dr. Hussey in support of women's influence to prevent another war. She was a founder of the New Jersey State Woman Suffrage Association in 1890 and served continuously as an officer for the next 20 years. A sampling of other organizations she supported include the National Association for the Advancement of Colored People, New Jersey Medical Association, Society for Clinical Advancement of New York, Welfare Club of East Orange and League of Women Voters of the Oranges.

At the time of her death, Dr. Hussey's will provided multiple bequests to a variety of personally meaningful clubs and charitable organizations. A November 14, 1927 newspaper article notes that one of Dr. Hussey's largest gifts was $5,000 to secure a "single tax" system. Dr. Hussey left another $5,000 to the Women's Citizen Corporation for the benefit of the International Women's Suffrage Alliance.

"Many Bequests in Hussey Will," 11-14-1927 (clipping with no identifiable name, from Newark Public Library Collections) 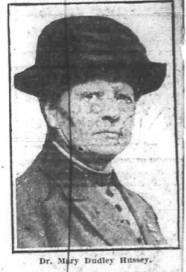