Martha Churchman Cranston was born in Delaware on September 14, 1846 to Henry Lawrence Churchman and Sarah (Reed) Churchman. She was the sister of Mrs. George Morgan, Mrs. William O. Springer, Miss Rebecca Churchman, Miss Sarah Churchman, and Harry Lawrence Churchman. She was the wife of John Alexander Cranston, who was vice-president of the Newport National Bank, president of the Newport Building and Loan Association, and a wholesale lumber dealer. Mr. Cranston also served as a member of the State Legislature. The two married on December 15, 1863. They had two daughters (Miss Helen Armstrong Cranston and Mrs. Bertha C. Phillips) and two sons (James Cranston and J. Paul Cranston). Mr. Cranston died at the age of 92 following a stroke at home in the Alhambra Apartments, 505 West Tenth Street, Newport, Delaware.

A number of sources highlight Martha Churchman Cranston's expansive work and honorable character. A tribute prepared by the Delaware League of Women Voters acknowledged Martha Churchman Cranston's "deep convictions of duty" and her beliefs that "right and justice were the fundamental principles of life and that equality before the law should be extended to all God's human family."

In addition to her public activity, Mrs. Cranston was a writer. For example, she wrote an article on Delaware that appears in Volume 4 of the History of Woman Suffrage, edited by Susan B. Anthony and Ida Husted Harper. That source notes that Cranston headed up the Franchise Department of the Woman's Christian Temperance Union beginning in 1889. [LINK]

Mrs. Cranston was active in multiple arenas and also served as President of the Newport branch of the Woman's Christian Temperance Union. A newspaper article tells of her presiding over the ninth annual convention of the Woman's Christian Temperance Union of New Castle county that convened in Mt. Salem Church. The article references Mrs. Cranston's annual report, which detailed a successful year for the W.C.T.U. with increased memberships and sustained activity throughout the year. Other newspaper articles reported that Mrs. Cranston was a member of the Women's Club of Newport and attended the Friends Meeting.

Martha Churchman Cranston served as President of the state Woman Suffrage Association from 1896 to 1915. She lived long enough to realize her dream of Delaware women exercising the right to vote. Mrs. Cranston passed away in Newport, New Castle County, Delaware on June 23, 1927. She was 80 years of age. At the time of her passing she had five grandchildren and one great-grandchild. Mrs. Cranston is buried at the Wilmington and Brandywine Cemetery in Wilmington, Delaware.

https://www.findagrave.com/memorial/131430075/martha-s-cranston; picture of her grave and lists other family members. Accessed November 17, 2017 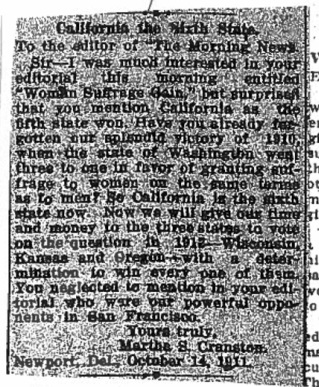 Photo of article ("Letters to the Editor") by Martha Cranston
courtesy of Cranston Morning News, 10-16-1911, page 4