Adah M. McMahan was born January 12, 1869 in Huntingburg, Indiana, to William Reed and Elizabeth Louise Helfrich McMahan. She graduated from Indiana University with her A.B. in 1889, and her A.M. in 1893. After working briefly as a schoolteacher of lower grades, she obtained her M.D. from the Women's Medical School of Northwestern University in 1897 (although she had first enrolled at the Indiana University School of Medicine), soon opening her own medical practice on 631 Columbia St. in Lafayette, Indiana. McMahan died on June 24, 1942, had never been married and had no children, although the Tippecanoe County Historical Association reports a donated trunk of her clothing from the First World War by a "foster son named John (no last name)" (Lippie).

Archival record of McMahan's suffrage activity begins in 1898 with the official founding of the Martha Home in Lafayette, Indiana, though it is likely she was already working towards municipal suffrage, due to her involvement in the local politics of Tippecanoe County, where she was instrumental in getting a woman appointed to the Lafayette School Board (Marshall, 2000, p. 276), and throughout the state of Indiana. In 1898, McMahan was one of thirteen local women who held "crucial leadership positions" (Marshall, 2000, p. 258) in three related organizations: the Lafayette Charity Organization Society (LCOS), which would work to replace all-volunteer corps with professional social workers; the Free Kindergarten and Industrial School Association (FKISA); and the Martha Home. The latter was opened on Alabama Street in 1898 by Mrs. Helen M. Jackson Gougar, under the auspices of the Woman's Home Association, and served as an interfaith "rescue home for girls and fallen women," enabling poor women and girls to live, intern, and learn domestic trade skills, such as sewing (DeHart, 1909). By 1909, McMahan had been elected head of the Martha Home, often interacting with its residents as medical consultant (Marshall, 2000, p. 258).

During the 1913 Lafayette mayoral election, McMahan actively lobbied for a full-time police matron to assist in their social work, marking a significant change in emphasis for the women's organizations from "private charitable work" to "increas[ing] their political leverage" (Marshall, 2000, p. 263), and signaling a break from the mixed-sex LOC toward establishing two women's only charitable societies in Lafayette—the Woman's Council and the Franchise League. While not a formal member of the National American Woman Suffrage Association (NAWSA), the Lafayette Franchise League had openly suffragist goals, and the Lafayette Daily Courier reports that McMahan hosted the first meeting in her own parlor on March 7, 1912, with Indianapolis suffrage leader Mrs. J. S. Barnhill, Purdue English professor Mrs. Emma Montgomery McRae, and Ms. Henrietta Calvin in attendance. One year later, in 1913, McMahan was elected director of the Lafayette chapter of the Women's Franchise League of Indiana, helping to author pamphlets on suffrage, women commissioners, and women trustees (Marshall, 2000, p. 265).

1913 marked the beginning of McMahan's higher educational philanthropy, as she became in frequent correspondence with Indiana University president William Lowe Bryan on sponsoring an annual scholarship essay contest for women students at Indiana University. In this year, she also began 12-year stint of service on the newly established IU Alumni Council, and she made frequent recommendations of women to serve in administrative positions at the university. In 1915 she was listed as one of several elected vice-presidents of the IU Alumni Association, and in a letter dated July 26, 1918, McMahan endorsed Stella Fox's application for the position of Dean of Women. Fox was herself a suffragist and a member in good standing of the Red Cross of Tippecanoe County, Indiana.

McMahan was also a headlining speaker at the Women's Auxiliary conference of the Second Pan American Scientific Congress in Washington, D.C. held from December to January 1915-1916, laying the foundation for what would later become the Pan-American Conference of Women. McMahan spoke on "A Community's Duty to the Child," portions of which were reprinted in the December 30, 1915 issue of the Evening Star. The event was reported by the Washington Herald as offering a potential "rude disturbance" of the "tranquil course of the Women's Auxiliary conference," alleging that some of the speakers had planned to put forth a motion for national suffrage. At the behest of the Conference's organizing secretary, Mrs. Glen Levin Swiggett, no proposal for national suffrage was made at the conference, although one speaker, Miss Zona Gale, predicted during her address that there would be "a great woman's conference" to be held at the end of the "present European conflict."

McMahan's most notable achievement may have been her service abroad. In 1918, she helped to form the Women's Overseas Hospital Association under the auspices of the NAWSA with other women doctors from the United States, allowing them to elide a ban on women doctors in the Armed Forces and enabling them to serve abroad as qualified medical volunteers with the French government. McMahan enlisted as a volunteer of the WOHA on August 31, 1918, serving at the Cempuis Military Hospital for Gassed Men, then taking charge of the clinics at Épinal-Vosges after the Armistice until her discharge on April 28, 1919. Her entry in Indiana Women in World War offers a brief anecdote: "Rather devastating, as I was only 45 miles from the front line. … Many incidents in relief work were amusing, probably because of my inadequate French. … Interesting to visit Joan of Arc's birthplace."

McMahan's activities following her 1919 discharge and following ratification of the Nineteenth Amendment are less well chronicled, though she did continue to work with IU President Bryan on the Memorial Fund Drive, which resulted in significant architectural expansion of the campus. She corresponded with the university registrar on ensuring elections of the alumni association, and there is evidence that she continued brief service on the board of the Martha Home in Lafayette, until its dissolution as a boardinghouse and rooming house, and finally its closure and sale in 1920 to the new Community House Association of Lafayette.

In 1920, McMahan was active with the League of Women Voters. The South Bend News-Times listed her as one of the League's representative members at a public hearing to discuss several bills to advance the state's school system, and to improve the economic life of women and children across the state. At the 1921 State Conference of Charities and Correction, held in Muncie, Indiana on October 22-25, McMahan presided over a session that highlighted the efforts of Indiana doctors within and without of state correctional facilities, and afterwards continued to serve on the Indiana State Board of Health.

Most of her archival tracings during this period occur under variable spellings of her name, such as "Ada McMahon." This variable spelling also occurs on a census record and on some correspondence from the IU President's office. However, her passport stamp, alumni records, and professional letterhead all record "Adah McMahan" in its correct spelling. 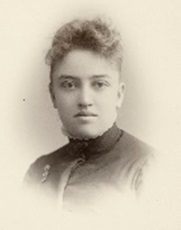