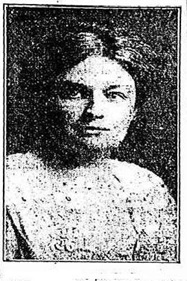 Katherine Hulst was born in Greenwich, an agricultural village that is north of Albany on 1 October 1872. Her father, Peter Henry Hulst was a physician. Katherine earned an A.B. degree from Syracuse University in 1896. She taught English in East Aurora and Corning, New York, as well as, being a clerk in the New York State Library at Albany.

In 1903, she married Joseph Gavit. The couple had two children, Frances Cornell (born 1904) and Henry Hulst (born 1906). Her husband shared his wife's commitment to women's suffrage. Kate was a founding member of the City Club of Albany and a member of the League of Women Voters.

Mrs. Katherine Gavit gave many speeches about the importance of Women's Suffrage. On June 18, 1913, she had much to say of great weight along with Miss Harriet May Mills, president of the Washington County Suffrage Association at their convention. She spoke to the College Women's Club along with Miss Alice Wells on "Property Rights for Women." She noted that most women were not protected by property right laws. She stated, "You would think from the way they talk that men thought that the minute a man was elected to the legislature he sat down and planned what laws he could introduce for the protection of women." She noted that it was absurd to mention that women would give up rights if they are given the ballot.

For the Convention of Suffragists, Katherine served as Chairman for Publicity. She was responsible for distribution of the posters which appeared in Albany, nearby cities, and rural communities. The posters were designed using blue, yellow, and white, the colors of the New York State Women's Suffrage Party. They depicted the ultimate victory of 1917, an army marching up a hill toward a summit. Mrs. Gavit had been chairman of the Albany Equal Suffrage club for years.

After the 19th amendment was passed by Congress on June 4, 1919, Katherine continued to work for women's rights. In October of 1919, she spoke and answered questions about problems with state legislation that would impact women. The legislation included the minimum wage, eight-hour work day, and health insurance.

Her husband, Joseph Gavit died in Albany on November 28, 1959. He had been the associate librarian for administration of the State Department of Education in Albany retiring after 50 years of service in 1946. Katherine died at the age of 92 in a nursing home outside of Syracuse on the tenth of December 1964. Her burial took place at Stoney Creek, New York, where the family spent summers.