Referred to by newspapers in a tabloid style as the "Lady of Sorrows," and also as one of the most beautiful women in Washington, Leopoldine Barber's life story is not fully known, as her husband's family seems to have kept details private. Born in Austria as Leopoldine Frederica Johana Katharine Fränzl, she met her American husband Le Droict (sic) Langdon Barber (1873-1905) when he was traveling abroad. They married in 1902 in London when she was 25 and he was 29, and they returned to Washington, DC in 1903, three years before his death from kidney disease. In 1904 they had a daughter, Julia Langdon Barber, who may also have suffered from poor health, and there are occasional newspaper mentions of a son but no evidence. Le Droict's wealthy and prominent parents were Amzi Lorenzo Barber (1843-1909), known in Washington as the "Asphalt King," and Julia Louise Langdon Barber (1844-1912). Amzi changed the spelling of LeDroict when establishing LeDroit Park in DC, and both variants are used somewhat interchangeably in archival records.

Le Droict and Amzi were interred together after the father's death in 1909, and the two wealthy widows became more politically active. Julia inspired her daughter-in-law Leopoldine's interest in women's suffrage, after Julia had already become prominent in legal campaigns against cruelty to horses. Because both were listed at some of the same suffrage conventions sharing the surname Barber, their biographies are sometimes conflated. In 1911 Leopoldine became President of the Washington Equal Suffrage Association. She also maintained European feminist and suffrage contacts, corresponding with followers of Bertha von Suttner, who was the second female Nobel laureate, and a well-known suffrage and peace advocate. Both Leopoldine and Julia became targets of antisuffrage activities during the two years that they were most visible in the movement. Many of their antagonists included women from social register circles in DC and New York, and this resistance, combined with family tragedy over the years may have led to Leopoldine's eventual emotional distress.

Leopoldine was described in the newspapers as suffering from neurasthenia, melancholia, or nervous breakdown, although none of the contradictory accounts written about her mental state should be trusted. Just a few weeks after the triumphant and bold Washington Post story about her presidency, on May 22, 1912, she was reported to have jumped from a balcony at her home, breaking either her wrist or her arm and sustaining unspecified injuries. The incident happened at Belmont, a turreted mansion built by her late father-in-law that was razed a few years later. Several newspapers sensationalized the account to change the height of the fall from three to four stories, to variously report that it was or was not a suicide attempt, and to further insist that she screamed, fell to a veranda, struck a porch roof and nearly broke it, bounced into and out of an oak tree, clung to a flagpole outside the house until it broke and dropping her to the ground, rolled down a hill, and either was unconscious for six hours or never lost consciousness. Of course these details could not all be true, despite the reported presence of two eyewitnesses, and The Washington Evening Star refuted them, insisting it was a simple accident. However, the Star tamer version also sounds like possible whitewash on behalf of a socialite, so the truth is unclear. Neither Leopoldine nor Julia appear in suffrage histories again.

On July 7, 1912, two months after Leopoldine's newsmaking tumble, Julia accompanied her, a sister from Austria, and the granddaughter to New York and saw them onto a ship bound for Europe. Then Julia died unexpectedly on the train trip home, leading to further sensational headlines. Initial newspaper reports indicated that the family kept the mother-in-law's death from Leopoldine because of her fragile mental health. If Leopoldine is truly in the 1917 photograph of National Woman's Party picketers in Washington, she would have had to return from Europe, and I have no evidence of that before 1922. However, there were stipulations in the will requiring Leopoldine and her daughter to live in the United States in order to inherit money, so she may have returned in order to to inherit, and that would make the 1917 date possible. Both Leopoldine and the granddaughter Julia are listed on a ship's manifest arriving in New York in July of 1922. A Leopoldine Fränzl lived in Katharinaberg, Czech Republic in 1934, and died December 19, 1960 in Vienna, Austria; if this is her then she would have been approximately 83. If instead she is the Leopoldine Franze (possible misspelling) who was buried in Vienna in 1942, then she would have been 65. She may be neither woman, in which case her trail disappears after 1922.

"Suffragist Cohorts to Meet in Force Here This Evening." The Washington Post, March 31, 1912; ES1. This article mentions Leopoldine's interest in Baroness von Suttner and her suffrage activities, and it featured the Harris and Ewing portrait on the left (this one is not in the LOC's Harris & Ewing collection): 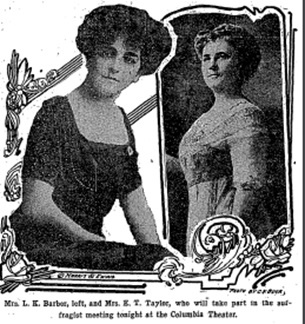 United States Congress, Senate Committee on Post Offices and Post Roads. Hearings Before the Subcommittee on Parcel Post of the Committee on Post Offices and Post Roads, November-December 1911. Testimony of Postal Officials and Former Postal Officials. Vol I. Washington, Government Printing Office, 1912. Pages 786-789. This testimony establishes her birth, growing up, and other details, although she may have shaved some years off of her age even while under oath.

"'The Lady of Sorrows' Is Recovering." The Salt Lake Tribune, Salt Lake City, Utah, 28 May 1912. Page A-1, above the fold. A good example of the sort of tabloid coverage Leopoldine received generally from newspapers.

Correspondence of Amzi L. Barber, National American Woman Suffrage Association Records, Box 3, Reel 2-3, Shelf no. 18,40: http://rs5.loc.gov/service/mss/eadxmlmss/eadpdfmss/1998/ms998019.pdf I have not examined this correspondence of her father-in-law, but it may be pertinent given that it is in the archives.

This is their marriage record, available at ancestry.com, that also confirms the spelling of both of their names. Note the handwriting is correct, but the ancestry.com record mis-spells Fränzl.

Images of the old Belmont mansion, razed in 1915 and not to be confused with the Perry Belmont House that was built in 1906 and stands today: https://ggwash.org/view/3975/lost-washington-belmont

"Her Will in a Book: Mrs. J. L. Barber's Diary Is Filed for Probate." The Washington Post, 13 July 1912: 7. This is the only source where Leopoldine is referred to as Poldy, which may have been Julia's nickname for her.