Florence Mary Maule was born in December of 1879 in Fairmont, Fillmore County, Nebraska to John P. and Mary Katherine (Finigan) Maule. She had one sister, Frances, two years older, and a brother, Harry, six years younger.

By 1900, the family lived in Denver, Colorado. Her father was a lawyer there, previously Deputy City Attorney of Lincoln, Nebraska. Her mother was an author, and Frances was also a writer, a newspaper reporter, as stated in the 1900 census. Harry followed their lead to become a newsman and an editor.

Florence married Frederick C. Cooley in Denver on 29 May 1901. The marriage did not last, but it was under the Cooley name that she was known for her activism for suffrage. She came east to New York state and lived in Putnam County, north of the city of New York. In 1910 her parents lived in New York City, but she was not living with them. After her father died in 1912, her mother remained in New York, and continued making a living writing.

Her name appears in the New York press at that time. In September of 1911 Florence spoke at the home of Mrs. Linnell Jefferson in Putnam County to a group of about 30 women. She was noted as participating in a suffragist parade in Manhattan in November, driving a Roman chariot in costume for the California delegation, but called "of Colorado." By the end of the year, she was representing the Putnam County Branch of the Women's Political League.

Two films are attributed to her as screen writer by the Internet Movie Data Base (IMDB): "Votes for Women" in 1912 and "Eighty Million Women Want--?" in 1913 (available on Amazon.com.) 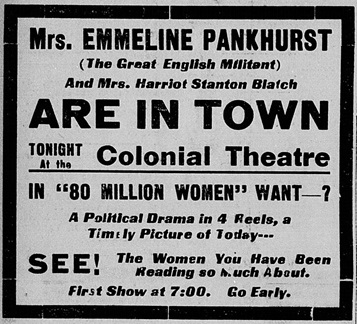 Showing at the Colonial theater in Keokuk, Iowa. [The Daily Gate City, January 15, 1914-accessed through Library of Congress.]

The suffragists' motor tour from New York City, through Putnam, Columbia and Dutchess Counties in August of 1913 was met by Florence Cooley in Brewster, NY. The Pine Plains Register called her "one of the [Women's Political] Union's most energetic and successful organizers." In October of 1913, Florence was one of the featured speakers at the Brooklyn Academy of Music, when women held a 24 hour rally. In 1915, Florence Maule Cooley served as one of two executive secretaries of the Women's Political Union and worked actively in New York's unsuccessful referendum campaign for woman suffrage that year.

Florence's most ambitious achievement may have been leadership of the demonstrations at the Democratic National Convention in St. Louis in 1916. When asked if the movement expected to be endorsed by the party, she said,

We hope for endorsements from both the old parties. 'Expect' has been replaced in the vocabulary of we suffragists, by 'hope.' In considering probable action by political parties we expect nothing and hope everything. We have learned much in the school of experience. We have sent out the call for 10,000 St. Louis women to participate in the June demonstration and to these we will add several hundred visiting workers from nearly every state in the union. The demonstration which is planned is a 'golden line' of women stretching on both sides of the streets from the Hotel Jefferson to the Coliseum. If we do nothing else, we will convince every delegate of the immensity of the suffrage movement. It will greatly advance our cause to have the delegates take that impression back home with them.

Her "golden line" of thousands of women dressed in white with yellow sashes and yellow parasols can be seen here: https://www.youtube.com/watch?v=aVG45k5oJrY. She stated that their eyes were on West Virginia, where an equal suffrage amendment was under consideration, "If chivalrous West Virginia grants women the vote, it will break the back of the antis' stock argument that the ballot will degrade women and mar their natural loveliness.

The platform put forth by the Democrat party that year did include "the extension of the franchise to the women of the country by the States upon the same terms as to men."

Florence had married a second time about 1914 to author Allen Updegraff, and had a son, David, in 1917. In the same year, Forence Updegraff was working as a national organizer, working in a NAWSA suffrage event in Wilmington, DE. The Updegraffs lived in Woodstock, New York in 1920. Allen had been a friend of Sinclair Lewis, meeting at Yale and dropping out of school together. He first married Edith Summers and had two children with her before meeting Florence. This marriage did not last long. Allen moved to Paris about 1926, and Florence moved to California with their son, David.

In 1940 she lived in a rental in Los Angeles with her son, and stated that they had lived in the same house in 1935. During the 1940s she had at least three novels published by Harcourt, Brace & Co.: Coat for a Scholar, Traveler's Candle, and Blue Dowry.