Isabella Williams was born in 1854 in Chicago, Illinois to John Marshall Williams and Elizabeth Caroline Smith of Evanston, Illinois. She married Charles D. Blaney (1854-1923) on September 6, 1877 in Evanston, Illinois. Shortly after their marriage, the couple relocated to the Santa Clara Valley in California, where Charles worked in real estate and in 1911 became Chairman of the first Highway Commission in California. The couple had one child, Clarissa Butler Blaney (1883-1901), who died when she was 17 years old of typhoid fever. Isabella Blaney lived until 1933 in Saratoga, California.

Isabella Blaney was actively involved in the California women's club movement. As a clubwoman, Blaney sought to reform society both in California, as well as abroad. She fundraised for and organized foreign medical missions, including the building of a medical hospital in Northern China. After her daughter's death in 1901, Blaney and her husband sponsored the construction of a hospital ward in San Jose, California for patients with contagious diseases.

Blaney was also an active suffragette. She helped form the Club Women's Franchise League and later became Vice President of the organization, which at its height had 2500 members and local branches throughout California. The League was well known throughout California for its campaign to galvanize support for suffrage in 1911 by serving Equality Tea at their headquarters in the St. Francis Hotel in San Francisco. In 1910, Blaney became chairwoman of the organization committee of Santa Clara County. In this capacity, she supervised and financed a house-to-house canvass of the Santa Clara Valley to persuade voters to support women's suffrage in the October 10th, 1911 special election. Blaney also served on the executive board of the California Equal Suffrage Association.

Six months after Blaney helped to secure the passage of suffrage in California, The California Outlook reported in April 1912, "[w]ith the utmost delicacy and tact," Blaney "won over to Woman Suffrage many of the most stubborn opponents, and inspired her co-workers with courage and enthusiasm."

After the success of her efforts at the state level, Blaney turned her attention in November 1911 to supporting and organizing for the La Follette League of California. She served as Vice President. When La Follette dropped out of the race, Blaney became a member of the Executive Committee of the Roosevelt Progressive Republican League of California, as well as one of the vice presidents of the Women's Roosevelt League of San Francisco. In March of 1912, she was nominated as a delegate from the Eighth Congressional District to the National Republican Convention. And in June 1912, she "cast her vote in the convention amid much cheering."

When Taft won the party's nomination, however, Blaney and the other Roosevelt delegates left the convention to form a new Progressive Party. When the Progressive Party was formally launched later that summer, Blaney, along with Jane Addams, Frances Kellor of New York, and June Gordon of New Orleans (who soon resigned), were the first women to serve on the executive board of a major political party—the Progressive National Committee.

Blaney continued to work as a local suffrage leader fighting for the ratification of a national suffrage amendment to the Constitution. In October 1919, she joined the National Women's party in Sacramento to be present when the state legislature ratified the national amendment. When several states held back their support of the amendment in January 1920, Blaney, alongside a delegation of women from San Francisco, went to Republican Party Chairman Will Hays' office to urge him to influence the remaining states to vote for the national amendment. 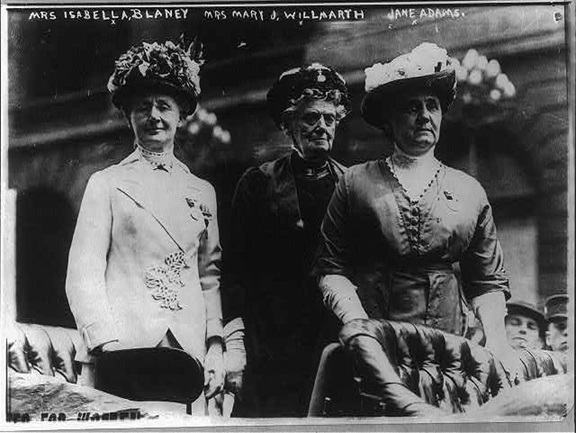