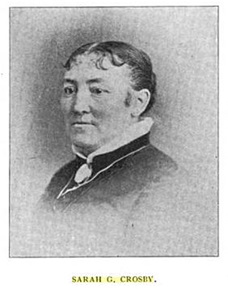 Sarah Gage Girard [sometimes spelled Jerrard] Crosby was a key figure in the women's suffrage movement in Maine. She was born on 27 May 1832 in Plymouth, Penobscot County, Maine to John and Jane (Gage) Jerrard. She married Albert Crosby on 24 August 1852 in Plymouth, Maine. Albert and Sarah became the parents of five children, namely:

In December 1873, Sarah G. Crosby was appointed the official stenographer for the Supreme Judicial Court of Maine, only the second woman to hold that position. That same year, she signed the 1873 call for a woman suffrage convention. She worked in the court system for fifteen years, and retired in 1888. Sarah G. Crosby had a wide assortment of friends and associates. She was a close friend to Mary Baker Eddy, founder of the Christian Science Church, whom she had met in 1864.

By 1893, Sarah G. Crosby had created the Waterville branch of the Woman's Christian Temperance Union (W.C.T.U.), was president of the local Equal Suffrage club and by 1898, was managing the press bureau of the Maine Woman Suffrage Association (MWSA). She was credited with building up the suffrage press circulation from six to eighty newspapers. Sarah G. Crosby died on April 27, 1915 in Waterville, Kennebec, Maine at the age of 82.