Laura Poe Uppercu, born in Illinois in 1879, was the daughter of Jesse Wheat Uppercu and Laura Isabel Hildebrandt; the first of his three wives. Both originally from Maryland, the couple moved to Illinois where Laura Poe and her 3 siblings were born (her father had an additional 3 children). Her father, a lawyer, moved around quite a bit due to his questionable business dealings, living in Maryland, Illinois, New Jersey and Alaska. Her brother, Inglis M. Uppercu, was a Commodore and also President of the Aeronautical Chamber of Commerce. Inglis entered into the automobile business with Richard Newton, who became Laura Poe's future husband. In 1902 Laura Poe Uppercu eloped and married Richard Thomas Newton - perhaps to distance herself from her father's reputation. Her husband was an English-born mechanical engineer who immigrated to the US in 1883. They lived in Nutley, New Jersey and in 1903 had a daughter named Lillian. In 1906 Richard was Treasurer of Atlantic Motor Car Company of New Jersey. By 1910, he was President of the Atlantic Motor Car Company of New York, and the couple had moved to New York City. By 1912, he became President of Newton-Humphreyville Company. Around 1916, they divorced and in 1917 she married Alfred Orme an officer in the English Army. She moved to Staffordshire, England in 1917 and lived there until her death in 1933.

At the National American Woman Suffrage Association convention in 1912, as a New Jersey delegate, Laura Newton detailed the work of the New Jersey branch. In her notes she reported that: there were now 27 branches, they had held a caravan/hike which covered 16 counties in the state and held meetings in 41 NJ towns, it paid 25% of the expenses for the Women's Political Union (WPU) legislative campaign, it held a suffrage parade on October 25th, it conducted classes in public speaking, it hosted many speakers, and organized multiple benefit events. In her report she wrote, "Owing to the fact that twenty-five cents confers membership for life, the Women's Political Union has brought into the suffrage movement of New Jersey thousands of working girls and women who had never before been numbered in its ranks. It carries on its work entirely by voluntary contributions." She explained, that through NJWPU's efforts, "the Women's Political Union secured the insertion of the first suffrage plank in the platform of the Republican Party in New Jersey in the Summer of 1912." She also wrote that, "The methods of the Union have been steadily directed toward taking the suffrage movement of New Jersey out of a woman's club atmosphere and into that of a political issue."

Mrs. Newton was present at the New Jersey Women's Political Union's (NJWPU) first state conference in June 1913, where she was elected one of the vice presidents and would serve for two years. This would be the only state-wide NJWPU conference held until after the referendum of 1915. In January 1914 the four woman suffrage organizations in New Jersey gathered in Trenton to plan how they were going to present their case before the Committee on Judiciary of the assembly. As one of the representatives of the NJWPU, she participated in the discussions. In January 1915, she attended a meeting of the Nutley Suffrage Association whose focus was to create a mail campaign, organize regular meetings, and host speakers. She also attended a hearing on the suffrage resolution in Trenton on January 25, 1915. Along with Harriet Stanton Blatch, she arranged for an unlit torch to be brought by tugboat from Pier B in Jersey City to New York City. It was to remain unlit until all women in the east could vote. She served as secretary of the legislative committee to push through suffrage for the state. After her move to England in 1917, it is unknown if she continued her suffrage work there.

Blog: Ancestral Discoveries by Janice M. Sellers, blog featured an article on a segment of the TV show "Who Do You Think You Are?"- Jesse Tyler Ferguson, August 6, 2014 www.ancestraldiscoveries.com/2014/08/who-do-you-think-you-are-jesse-tyler.html 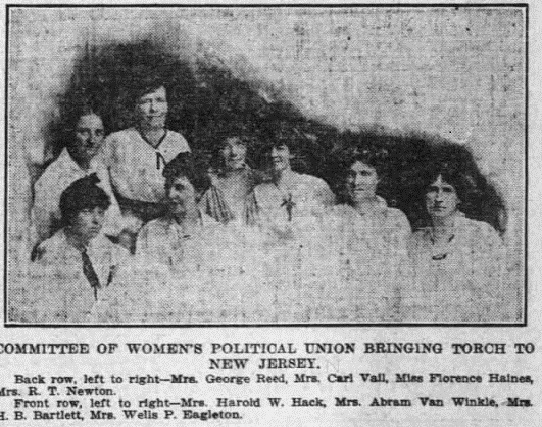 From The Central New Jersey Home News, 05 Aug 1915, 7. Mrs. Newton is fourth from the right in the back row.
back to top
Previous Next