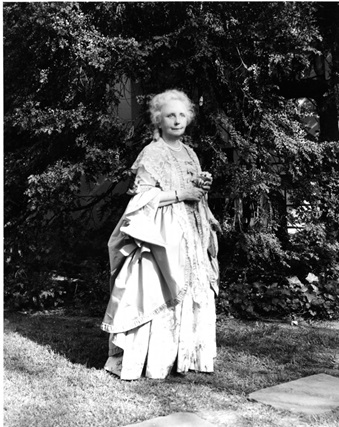 Mrs. Henry Ridgely, also known as Mabel Lloyd Ridgely or Mable Ridgeley, was born to Charles G. Fisher and Philippa Lloyd Fisher on April 13, 1872 in Washington, D.C. At the age of twenty-one, she married Henry Ridgely and the young couple settled in Dover, Delaware. One year later, in 1894, they had a daughter who was named after Mable's mother, Philippa E. Ridgely. Throughout her life Mrs. Ridgely became a prominent figure in both state and local politics.

During World War I, Mable chaired the Women's Liberty Loan Committee for the state. In regard to this position Mable made the following statement,

"Every war has proved our courage. Sacrifice has begotten sacrifice. Obstacles have been met, have been overcome. Now that German peace efforts are abroad and the epidemic is at home, stalking hand in hand, opposing the Liberty Loan, arise with all the energy at your command. Let American womanhood answer with their bonds."

Mrs. Ridgely was an important agent in the Women's Suffrage movement in Delaware. She was the president of the Ratification Committee for Delaware in 1919. Both Mable, along with other leaders, interviewed fifty-two legislators and other "influential men" regarding their stance on women's suffrage. In addition to the interviews, Mable Ridgely was also a voice of the Committee. She made a statement to the State Democratic Committee on January 22, 1920 and won over their support. In addition, Mable "served as the first president of the Delaware Chapter of the League of Women Voters."

Mable Lloyd Ridgely was also the President of the Delaware Equal Suffrage Commission and lead the suffragists of Kent County. With this position came a lot of press exposure and statements, one of which Mrs. Ridgely made on March 22, 1920. She exclaimed,

The commission lobbied and protested in Dover, Delaware where Mable resided. One of these encounters included a state General Assembly which became known as the "war of the roses." On March 25, 1920, suffragists, or "suffs" who wore yellow roses, and the Anti-Suffragists, or "antis," who wore red roses on their boutonnieres flooded into Dover. Both parties made their sides known in a spirited debate, often resulting in conflict and name calling. Mrs. Mable Lloyd Ridgely was one of the "main speakers for the suffs." The suffragists even went so far as to kidnap the chairman of the committee who was responsible for "presenting the suffrage amendment on the floor" with the goal of "preventing the vote they knew they would lose." Their prediction was correct, and their efforts proved unsuccessful, when the amendment was defeated in a vote of twenty-three to nine on April 1, 1920. The "special session [was] the last, greatest, and most colorful suffrage battle in Delaware's history." Mrs. Ridgely responded to the loss in the Morning News on April 21, 1920 claiming, "Of course the failure to ratify is a fearful disappointment. But it really is only a brief delay."

Mable was incredibly active in the city of Dover; an important part of her legacy was the founding of the annual festival, Old Dover Days, in 1933. In 1937, the festival was held in May and included many activities. Heirlooms from founding families were to be displayed throughout different houses, dancing in the center of the town, and "Historical Pageant in front of Legislative Hall." The money raised would go towards the Dover Garden Club that organized the event; Mable Lloyd Ridgely was the president of the Club and was in charge of a committee titled "Ridgely Home." Not only did she found and organize the event, but both Mable and the Ridgelys were important enough in the community to have their home be a main showcase of the festival.

Mrs. Ridgely was also the president of the Public Archives Commission which contributed to her role of preserving local history. While the Old Dover Days festival would preserve tradition, Mable and her husband played a key role in maintaining, preserving, and restoring the physical history of Dover as well. In their free time, the busy couple renovated local historic landmarks and buildings. Some of the Ridgely's projects included the Old State House, the Golden Fleece Tavern turned Capitol Hotel, and the John Dickinson Mansion.

Henry Ridgely passed away in 1940. Mable's devotion to her husband did not falter. Almost a decade after her husband's death, in 1949, she organized various documents concerning the history of her husband's family into a novel, What Them Befell.

Mrs. Ridgely remained in Dover and an active member in her community up until her death on January 11, 1962. As a result of all of her statewide woman suffrage activism, Mable was inducted into the Hall of Fame of Delaware Women. Her legacy lives on through the continuation of the Old Dover Days festival, a Research Room in her name within the Delaware Public Archives, and the historical landmarks that she saved.