Gertrude Weil was born on December 11, 1879, in Goldsboro, North Carolina, of German immigrant, Henry Weil, and his wife, Mina Rosenthal Weil. Although she had the benefit of growing up in an affluent household, Gertrude was raised with a sense of civic and community responsibility, helping her mother with local charity endeavors at a young age. The Weil family valued education and at the age of sixteen, Gertrude was sent to the progressive coeducational Horace Mann preparatory school in New York City. At Horace Mann, she was able to enjoy a rich education and the cultural opportunities that the city afforded.

After graduating Horace Mann, Gertrude entered Smith College as part of the Class of 1901. It was at Smith that she came under the influence of strong independent professors and fellow students who shared and encouraged her interest in political and social issues. She also embraced women's rights, maintaining that women were indeed citizens of the United States even if they could not vote. Upon graduation, Gertrude returned to Goldsboro and joined the local woman's club, quickly becoming president. By 1912, she was an officer of the state council of the Federation of Women's Clubs. The Federation was known to support women's positions on local schoolboards and committees, even creating a committee on "The Legal Status of Women in North Carolina." Gertrude's interest in women's rights continued to grow and her energy and talent for speaking enabled her to become a leader in women's suffrage groups. She joined the National American Woman Suffrage Association and the Equal Suffrage League of North Carolina, and helped found the Goldsboro Equal Suffrage Association, serving as its first president.

As North Carolina moved closer to a vote on the ratification of the Nineteenth Amendment, Gertrude worked to gather signatures on petitions and rally support. As with many others, she suffered a great disappointment when North Carolina failed to ratify the Amendment in 1920, and she publically chastised the legislators responsible for the loss. When women gained the right to vote, she strove to educate women on their civil rights and responsibilities, and began the North Carolina League of Women Voters. Gertrude also became a leader in the Legislative Council of North Carolina, and lobbied for women's labor rights and social welfare, becoming heavily involved with the Goldsboro Bureau of Social Service and the North Carolina Conference for Social Service.

In addition to women's rights, Gertrude was also active in Civil Rights issues. She had become interested in the racial equality in the 1930s, and continued her activism into the 1960s. Gertrude established parks and pools for underprivileged African-American neighborhoods, and organized a bi-racial council for Goldsboro.

Gertrude Weil was respected and admired by all who knew her. Beyond her political involvement, she remained active in the Jewish life of Goldsboro throughout her life, raising money for Jewish charities and rescuing Jewish refugees from Europe in the 1930s. She lived until she was ninety-one years of age on May 30, 1971, dying only two weeks after North Carolina ratified the Nineteenth Amendment. 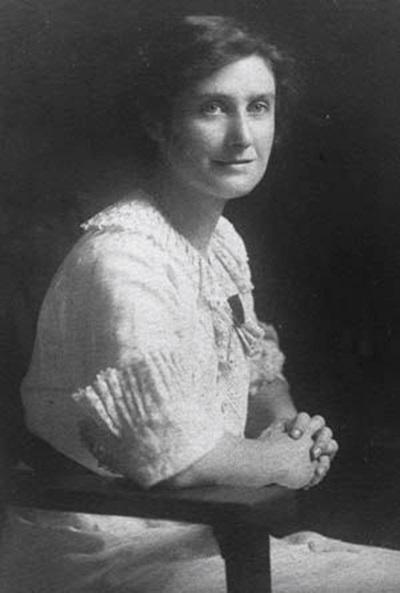 Gertrude Weil, 1920s.
The original is located at the North Carolina Office of Archives and History. Accessible online at the Jewish Women's Archive: https://jwa.org/media/gertrude-weil.