Laura Louise Bain was born in November 1866 in New York city to Dudley W. Bain, a lawyer, and Ella V. Bain. Her house was quite full as she was the eldest of three and grew up with multiple servants. Her sister Ella F. Bain was born in 1868 and her brother Dudley Waldemar Bain was born in 1869. The Bain family experienced some significant changes between 1870 and 1880, having relocated to New Jersey where Laura's father remarried. In 1890 Laura married Carl Montaigne Vail, an engineer, and together they had four children. Their first son, Carl Waldemar Vail, was born in July of 1893, followed by Donald B Vail in April 1895, Eileen Vail in June 1896, and Rosemary Vail in June 1910. The Vails and their children lived in New Jersey and, much like her own family, had live-in servants to work in their house, although they seem to have employed only one at a time. In 1929 Mrs. Vail was widowed. She died in 1953 in New York State and is buried in Ithaca, New York, next to her husband, oldest son, and her daughter-in-law.

The earliest record of Mrs. Vail's club involvement is in 1911 with the Browning Society. Mrs. Carl Vail, as she was noted in organizational documents, and in newspapers, served on the hospitality committee for the club, which read and discussed the works of the Victorian poet Robert Browning. Mrs. Vail was also a member of the Daughters of the American Revolution and served as a trustee for a two-year term in 1916.

Mrs. Vail's suffrage work began by 1913 as a member of the Women's Political Union of New Jersey, an organization that worked to get women's suffrage through state votes. That year she acted as a representative of the organization for the purpose of planning and organizing an event featuring Mrs. Oliver H. P. Belmont, a suffragist speaker. Laura joined the other members of the Union in a peace advocacy march in August of 1914. She is listed as one of the Union's eleven vice presidents in 1915. In her position she worked and travelled with the Union's president, Mina Van Winkle. In 1915 Mrs. Vail and Mrs. Van Winkle acted as an envoys for the group to hearings on suffrage in the United States Senate.

Although it appears that most of Mrs. Vail's suffragist work was with the Women's Political Union, she did have some involvement with other groups as well. In January of 1915 she inquired about joining the Congressional Union for Woman Suffrage headed by Alice Paul and Lucy Burns. She also subscribed to their newspaper, The Suffragist. She worked with Mrs. J. G. Mearns, as Mrs. Mearns was the one who alerted the Congressional Union for Woman Suffrage of Mrs. Vail's desire to join. Mrs. Vail in fact became a member of Paul's National Woman's Party and in 1918 was elected to serve as the chairman for New Jersey's sixth congressional district, although it appears that she did not respond to the notification of her position, so it is unclear if she ever assumed it. In addition, she was a member of New Jersey State Senator Charles O'Connor Hennessy's Suffrage Legislation Committee in New Jersey in 1916, which worked to introduce a bill into the state senate that would grant women suffrage for presidential elections. Any social reform work Mrs. Vail may have engaged in after the passage of the Nineteenth Amendment is unknown.

In conclusion, this was all of the information on Mrs. Vail that I could find. I found most of the information on her personal life by searching censuses on FamilySearch.org. The censuses gave me some insight into her home life but couldn't tell me much about her relationships or motivations for advocating suffrage. Through Histvault I was able learn about her roles in some organizations, but most of the results echoed the same thing: that she was one of the vice presidents for the Women's Political Union of New Jersey. None of the results were able to tell me what her role entailed or when she began working in that position. Although I was able to learn about her involvement in various groups and events through reading newspapers, not much was written about her. This is probably because she did not hold any high position in her organizations, so she may not have been considered important enough to have people write about her. 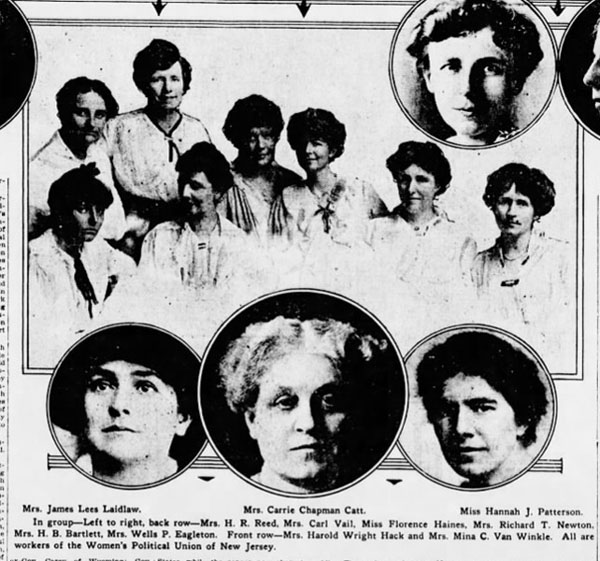 Group photo of Women's Political Union of New Jersey (above) from the New York Sun, September 12, 1915. Laura is in the back row, second from the left.