Sarah Burger Stearns was born in New York City on November 30, 1836 to Edward and Susan Burger. She grew up in Ann Arbor, Michigan and Cleveland, Ohio, where Sarah noticed the inequalities that women were facing at her schools. At the age of fourteen, she attended her first women's rights convention in Ohio, which inspired her to use her position as editor of her high school newspaper to begin her lifelong campaign of equality.

In 1858, Stearns and twelve other women petitioned the University of Michigan to allow women to be admitted into the school. Although their efforts were unsuccessful, they started a conversation that did not cease until women were admitted in 1869. Stearns went on to receive an education at the State Normal School in Michigan, where she met her husband, Ozora Stearns. He was also a supporter of women's suffrage.

Stearns spent most of her life lecturing on equality. Before moving to Minnesota, she was invited to speak about the "Wrongs of Women and their Redress" in Boston, Massachusetts for the Parker Fraternity, which she repeated in several suburban towns. In 1866, the Stearns moved to Rochester, Minnesota. That very year, Sarah was asked to give a speech on "Our young and growing state; may she ever be an honor to her citizens," at a Fourth of July celebration. She took the opportunity to discuss women's suffrage. The following year, Stearns teamed up with Mary Colburn to petition for taking the word "male" out of the state constitution. When this act failed, they organized the first independent suffrage societies in their home communities. In 1875, Stearns' society was integral in the passing of a Minnesota amendment that allowed women to vote in school elections.

In 1872, Sarah and Ozora moved to Duluth, Minnesota, where he was hired as the district judge. During their years in Duluth, Sarah was elected to the Duluth Board of Education, founded a state shelter for women and children, served as recording secretary and chair of the resolutions committee for the first Woman's Christian Temperance Union State Convention and began the Duluth Woman Suffrage Circle.

In 1881, Sarah Stearns and thirteen other prominent women met in Hastings, Minnesota to create the Minnesota Woman Suffrage Association (MWSA). Stearns was elected the first president, which proved to be a wise decision by the group when the number of members more than doubled after the first year of her presidency. In 1884, she gave a speech at the annual state suffrage meeting in Minneapolis, and the following year, returned to lecture at the Convention of Woman Suffragists.

Stearns continued to stay busy giving speeches, advocating equal rights as president of the Equal Rights League, and writing for the Minnesota chapter of The History of Woman Suffrage until her husband fell ill in 1892, forcing them to move to a better climate in California. Sarah remained an active member of the Los Angeles Suffrage League until her death on January 25, 1904. 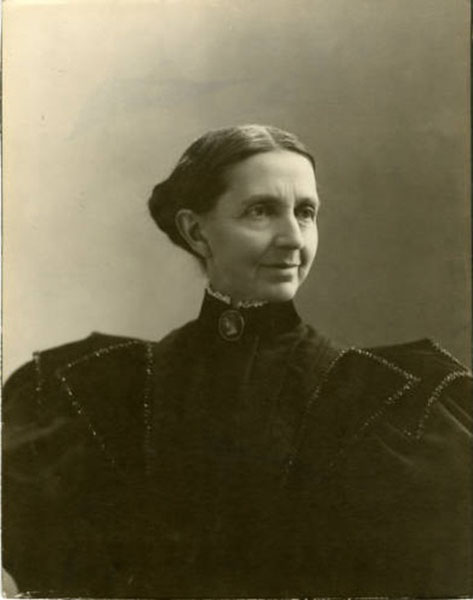 5."Stearns, Mrs. Sarah Burger." American Women- Fifteen Hundred Biographies with over 1,400 Portraits: A Comprehensive Encyclopedia of the Lives and Achievements of American Women during the Nineteenth Century. 1897. [LINK]

7.Chapman, Mary and Angela Mills. "Eighty Years and More: Looking Back at the Nineteenth Amendment." Canadian Review of American Studies. 36.1(2006):1.

Click here for another sketch of Sarah Burger Stearns.