Biographical Sketch of Teresa A. Crowley

Teresa A. O'Leary was born one of seven children in Wakefield, Massachusetts in 1874. She served many roles throughout her life: wife, mother, lawyer, actress, and suffragist. Known for her erudite nature, Teresa spent much of her time studying Latin with her brother -who attended Harvard Medical School- and reading about law at the Boston Public Library. She worked as a secretary at a prominent law firm in Boston after graduating from school. There, she met John E. Crowley, whom she eventually married before moving in together in Brookline.

John E. Crowley was a distinguished criminal attorney who encouraged Teresa's passion for law and advocacy. However, Teresa did not start practicing law until after the births of her three children. She resumed her law studies and was the only woman among 150 in her group to take the Suffolk bar examinations, which she then passed among the first 10. An article on female attorneys noted Teresa as one of the candidates recommended for admission to the bar and deemed her to be "a very bright, capable woman." Teresa then opened her own law office and specialized in real estate and kindred fields.

For Teresa, the Suffrage Movement was a family affair. She brought her children to two women's suffrage parades in Boston and New York City. Teresa first became directly involved with the suffrage movement by working around the office of Mary Hutcheson Page. At an outdoor meeting, Teresa was forced to make an impromptu speech after the original speaker's voice gave out. Teresa then became a prominent outdoor orator at suffrage events. Teresa eventually became Chairman of the Legislative Committee of the Massachusetts Woman Suffrage Association. As chairman, she went through party opponents' voting records and published them "with sarcastic and revealing comments." One of her most important achievements was removing Levi Greenwood from his presidency of the MA State Senate by publishing his voting record, making speeches, and holding rallies. According to a biography written by Teresa's grandson, a Greenwood employee asked Teresa, "How can I vote against a boss like that?" Teresa's eloquently responded, "It all depends on whether you want charity or justice." Another one of Teresa's successful campaigns came from the organization's contribution to the defeat of Senator Weeks of Massachusetts. From 1910-1919, Teresa became especially involved in writing to support the suffrage movement, from criticizing anti-suffrage legislators to advocating for the vote. Some of her notable works include "The Suffrage Coffee House," "Some Reasons Why House Bill No. 797 is Constitutional," and "An Aggressive Congressional Policy."

Apart from becoming President of the Massachusetts Women's Bar Association, Teresa did not become more politically involved after the ratification of the 19th amendment. She was offered "a substantial fee" to manage the campaign of a mid-western senator, but she felt that her family and legal career came first and declined the offer. In a 1943 letter by Gertrude Halladay Leonard, she writes "I should like very much to have Mrs. Crowley receive the appreciation which she so greatly deserves and which I have always felt has failed to be given her. Maybe no one else had an opportunity to know how the passage of that suffrage bill depended on her knowledge of the political situation, and on her brilliant use of every opportunity and every little bit of luck that came our way." 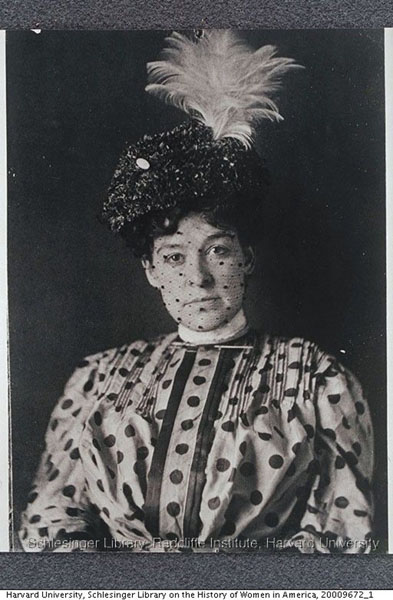 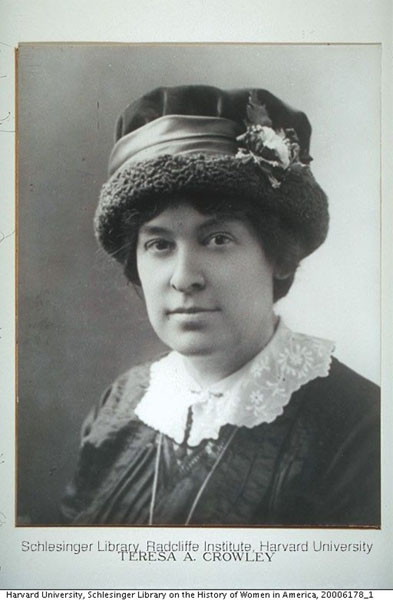 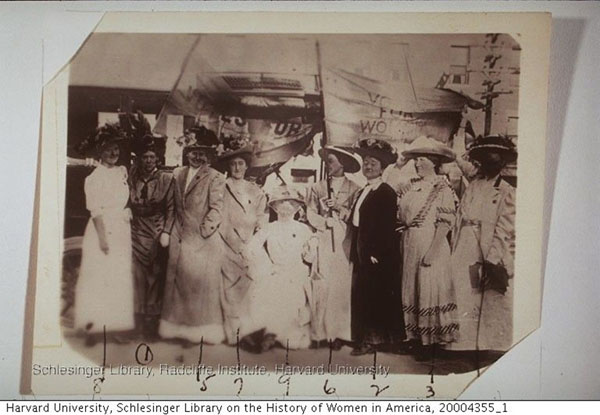 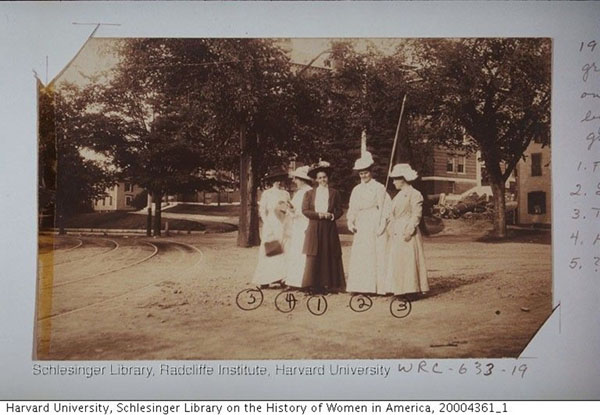 Title: Speakers standing beside trolley tracks in what seems to be a residential neighborhood (3. Teresa)?
Source: Schlesinger Library