Marion Harvie was born September 8, 1875, in Cheshire, England to Thomas and Elizabeth (Watt) Harvie. She immigrated to the United States in the early 1890s, with her sister Alice (Harvie) Duden, who referred to her by the nickname "Minnie." Marion attended Brown University in Providence, Rhode Island, from 1898 to 1901, where she graduated Phi Beta Kappa with a degree in philosophy. Prior to that, she taught at a private girls' school in New England.

Marion married Harry Everett Barnard on June 20, 1901, in Rhode Island. They resided in New Hampshire, where Harry was a chemist for the State Board of Health, and they later relocated to Indianapolis, Indiana, where Harry was the State Commissioner of Food. They had a son, Harvie Barnard, born September 5, 1903, and a daughter, Marion Elizabeth Barnard, born December 16, 1908. Marion and Harry remained married until his death on January 3, 1947. Marion remained a widow until her death on March 3, 1969.

Marion became involved in the suffrage movement while still living in New Hampshire. One particular letter, dated February 20, 1903, among the archival records at the Indiana Historical Society, is from Carrie Chapman Catt, President of the National American Woman Suffrage Association. The letter notes that Marion has been away from work for several days and is presumed to be sick again. It requests that Marion return articles she took home with her, and offers an expression of sympathy for her illness. In this letter Catt states, "I wish you had the stomach of an ostrich. You deserve to have with that splendid brain of yours." The letter, dictated on letterhead, includes both Marion and Harry among the list of Advisory Committee members of the National American Woman Suffrage Association. Many of the other letters from her sister, Alice, and various friends, in February of 1903, also show concern toward Marion regarding a stomach illness. As the reader may recall, Marion and Harry's son, Harvie, was born in September 1903.

In 1905, the couple moved to Indianapolis, Indiana, where Marion continued her suffrage efforts by becoming involved in the revival of the defunct Indiana movement. At a convention organized by the National American Woman Suffrage Association, held in May 1906, in Kokomo, Indiana, and presided over by the National Association's treasurer, Mrs. Harriett Taylor Upton, Marion was elected treasurer of their Indiana Auxiliary. The association affiliated with the National body and always remained an auxiliary, but there is no record to show that any work was actually completed.

After the departure of the Auxiliary's president, Mrs. Sarah Davis, Mrs. Upton wrote a letter pleading with the Auxiliary's second vice president, Mrs. Anna Noland of Logansport, to call a convention. Mrs. Noland responded eagerly, using her own funds, and help from her husband during his leisure time, to send hundreds of letters across the state to generate interest. This led to a second suffrage convention, this time in Logansport, and held over two days, March 16-17, 1909. The convention generated significant interest resulting in a welcome by Mayor George P. McKee, and a suffrage edition published in The Reporter, a Logansport daily paper. Marion was re-elected treasurer at this convention, and continued in that capacity through 1914. Marion was also a member of the Franchise League of Indiana, established in 1911 and formed through volunteers in 1909 while working to get a woman elected to the school board.

In addition to her involvement in the suffrage movement, Barnard was a member of the Irvington Women's Club; involved in sanitation efforts such as cleaning up markets and groceries, safe drinking water, and waste disposal; and the Irvington Tuesday Club, an organization devoted to presenting papers on history, art, and music. She and her husband were also one of the founding couples of the Irvington Dance Club, which is still in existence today.

Marion is entombed alongside her husband at Washington Park East Cemetery in Indianapolis. 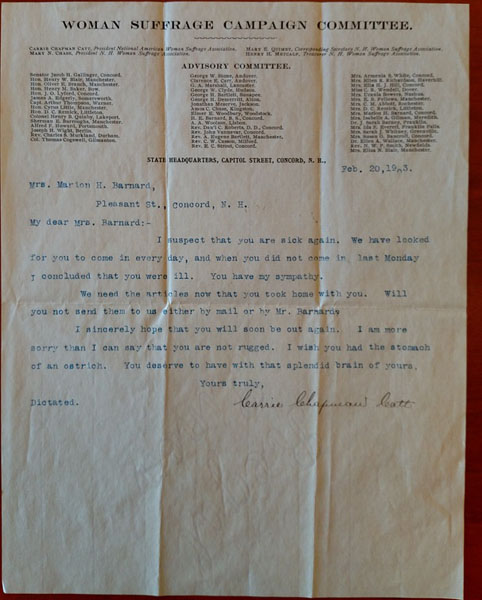 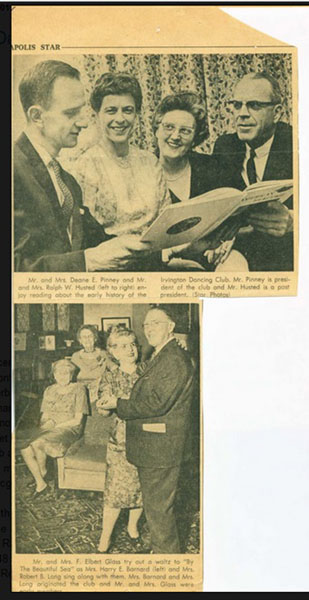 Barnard Home Then and Now 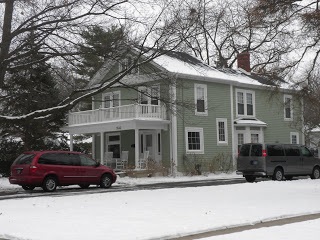 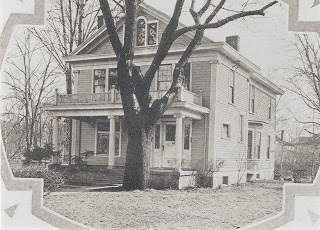 Harry and Marion Barnard moved into 5543 University Avenue about 1908. Mr. Barnard was the food and drug commissioner for the state of Indiana and he frequently made the news for closing down bakeries or other unsanitary food establishments. Mrs. Barnard was an active suffragette and clubwoman in Irvington. She corresponded with her sister, a dentist, in New Hampshire regularly. These letters are now on file in the Indiana Historical Society.