Emma Maria Lore was born to Charles B. Lore and Rebecca Bates between 1868 and 1869. She was born and raised in Wilmington, Delaware. Emma attended the prestigious Ogontz girls' school where she likely studied music as she went on to become a noted musician. Emma's elite education as well as her father's position as Chief Justice of Delaware indicate that she came from an influential, upper-class family.

As an adult, it appears Emma continued to live with her parents. It is possible Emma's close relationship with her forward-thinking father helped mutually influence their activity in the suffrage movement. As a Chief Justice, Charles B. Lore was an important member of the pro-suffrage movement in Delaware. Lore helped frame a petition to the Constitutional Convention in 1897 in favor of suffrage. Similarly, in 1897 after legislature passed a bill requiring certain protective laws for working women in Wilmington, Lore appointed a female factory inspector.

While Charles B. Lore was a prominent political figure, Emma was an equally active participant and worked tirelessly for the suffrage movement. Emma was treasurer of the Delaware State Equal Suffrage Association from its creation up until 1911. She was also treasurer of the Wilmington Equal Suffrage Association. Both organizations advocated for women's suffrage and likely held meetings, spread information, and appealed to politicians like other suffrage groups at the time. In 1913, when a group of suffragists made a pilgrimage from New York to Washington D.C. to picket, both the general Delaware State and Wilmington branch of the Equal Suffrage Association welcomed the activists. The Evening Journal reported "Seldom have Wilmingtonians turned out to welcome a set of propagandists as they did yesterday when the Pilgrims for Women Suffrage on their hike from New York to Washington arrived here." The Wilmington branch was not only very active but also the largest in the state and in March of 1910 Emma was appointed to investigate how state laws pertaining to property ownership and guardianship over children were affecting women. In perhaps less significant but still useful ways, Emma was also chosen to count ballots for the election of a new chapter president and often utilized her musical talents for pro-suffrage events.

It appears that Emma spent a great deal of her time involved in civic duties, as she never went on to marry or have children. After her father passed away, Emma received the habit of the Ursuline Sisters from a Wilmington chapel. Once part of the convent, there is very little information pertaining to Emma's life although it appears she continued to be an avid musician. Her date or location of death is also unclear. Despite these gaps, it is clear that Emma was an active and important part of the Delaware suffrage movement.

Equal Suffrage Association of Wilmington banner carried by suffragists during the New- York-to-Washington-D.C. pilgrimage that took place in 1913. 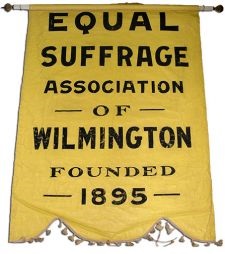