Emma Maddox was born in Baltimore, Maryland on November 19, 1853 to John T. Maddox and Susanna Benton Moore. She grew up with two sisters, including Etta Maddox, who was the first woman to pass the Maryland State Bar. Maddox studied music at the Peabody Conservatory of Music. Although she was known in the Baltimore City music world, the outspoken and independent woman focused her time and energy on women's rights.

In 1892, Maddox married Dr. J. William Funck, who not only supported her participation in suffrage organizations and events, but who was also a suffragist and part of the Men's League for Woman Suffrage. Emma Maddox Funck joined the Baltimore City Woman Suffrage Association and became president of the club in 1896. She also became the president of the Maryland Suffrage Association in 1904. Funck held both positions until the ratification of the Nineteenth Amendment in 1920. Funck encouraged county suffrage clubs to meet together in order to capitalize on their influence. Her clubs held Sunday afternoon meetings and they invited prominent suffrage leaders to speak, including the British militant suffragist, Emmeline Pankhurst.

Funck was a leader in the planning of the 1906 National American Woman's Suffrage Association's annual convention, which was held in Baltimore. The 1906 convention was one of the greatest meetings of suffragists in the movement's history. It inspired a younger generation to begin the suffrage fight. Funck organized many other suffrage conventions and events in Maryland, propelling the state into the mainstream of the national movement.

Funck's motto was "This one thing I do." Her one focus was getting women the right to vote. In 1910, Funck's Maryland Women's Suffrage Association introduced a bill to the Maryland legislature, which would secure the right to vote for the women of Maryland. The Assembly tabled the bill. After repeated efforts to win suffrage at the state level failed, Funck and other suffrage leaders in Maryland turned their efforts to securing passage of the Nineteenth Amendment.

Some suffrage leaders believed Funck was too conservative in her leadership since she refused to adopt more militant tactics, fearful of alienating women who were not completely converted to the cause. Many women in Maryland were more comfortable working for civic issues instead of political issues, and Funck believed their support could be won with patience rather than more aggressive tactics.

After the Nineteenth Amendment was ratified on August 18, 1920, Funck was instrumental in organizing the State Federation for Republican Women. Her new mission was to ensure women voted and ran for office. In 1928, Funck ran for the office of Clerk of the Court of Common Pleas of Baltimore City. Though unsuccessful in her campaign, her candidacy made her the first woman to run for a city-wide office in Baltimore. Funck's proud husband wrote of her accomplishments: "She has the honor of not only being a pioneer, but of giving many more years of service to the suffrage cause than any other Maryland woman, and bringing more distinguished women in to the State than any other person." 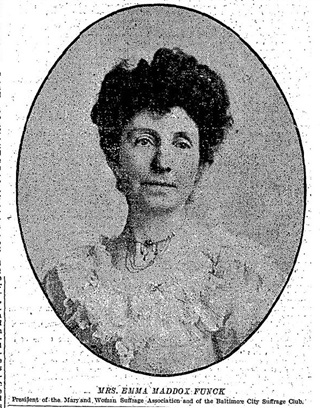 Source: "Demand the Right to Vote: National Convention of the Woman's Suffrage Association to Be Held in Baltimore," The Baltimore Sun. January 7, 1906.