Biographical Sketch of Ida A. Craft

Ida A. Craft was born in 1861 in Brooklyn, New York, the daughter of John Craft. Ida Craft was a member of the Women's Christian Temperance Union. She spent most of her life devoted to helping women obtain equal rights.

The work Craft did for the women's movement mostly took place in New York City or New Jersey. She was well-known for her participation in suffrage hikes, led by "General" Rosalie Jones. These events involved a group of women marching throughout the country advertising for women to have the right to vote. Craft was part of the militant wing in getting women the right to vote. Beginning in New York City, the first march went to Albany; a second, longer hike went through New Jersey to Philadelphia, Baltimore, and Washington, D.C., arriving just before Woodrow Wilson's inauguration in March 1913. Ida Craft was second in charge of these walks, earning the nickname "Colonel Craft." Almost everyone referred to her by this name. Sometimes when Craft marched, she was tired and in pain; however, she persevered and led the group to where they needed to go. Craft led her women to the Capitol in Washington to protest the exclusion of women from political rights. When she arrived in Washington, she would often be the guest of honor at luncheons. She was given a gold medal in 1913 for her "devotion and courage to her cause." 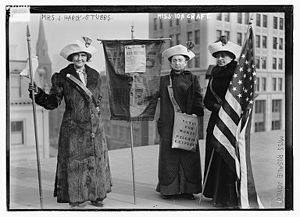