Lucy Browne Johnston was born in 1846, in Camden, Ohio to Robert and Margaret Browne. She was one of five children. After attending grade school in Camden, she attended the Western Female Seminary in Oxford, Ohio, where she earned a doctor of laws degree. After earning her degree, she moved to Minneapolis, Kansas, and started a grade school. In 1875, she married William Agnew Johnston, whom she met while he was advocating for the continuance of her school. William Johnston was a prominent political figure in the state, serving in both houses of the legislature, as attorney general, and on the state Supreme Court. Lucy and William Johnston had two children, Margaret and John.

Lucy Johnston's activism covered a wide variety of concerns. One of her greatest areas of interest was education. Starting in 1877, she served three terms on the Minneapolis Board of Education and in 1899, she succeeded in lobbying the state legislature to pass a law establishing traveling libraries throughout the state. In 1920, the Women's Federation of Kansas renamed all traveling libraries "The Lucy B. Johnston Traveling Libraries" in honor of her dedication to this cause. Johnston also worked to establish, in 1917, the State Industrial Farm for Women in Lansing, which was first women's prison in the state. The law that created the prison also allowed its board of directors, rather than the courts, to set the sentence limits for its incarcerates. In 1919, the board's power was challenged in the state Supreme Court as being unconstitutional and possibly abusive, but was ultimately upheld. Johnston was also a dedicated prohibitionist and worked to make her hometown of Minneapolis a dry town. She served on the Board of Directors for the General Federation of Women's Clubs and was a state regent for the Daughters of the American Revolution.

Johnston was president of the Kansas Equal Suffrage Association (KESA) during its successful 1911-1912 fight for full voting rights for Kansas women. Feeling that political partisanship was what had doomed an 1894 effort to pass a suffrage amendment, Johnston and other leaders of the KESA studiously avoided aligning their campaign with any one political party. Instead, they tried to build as large a base of support as they could. Under Johnston's leadership, a massive grassroots campaign was launched, resulting in $16,000 in donations from both in-state and out-of-state supporters, the organization for suffrage of about one third of all counties in Kansas, the endorsement of the suffrage amendment by all women's organizations (comprising over 60,000 women) in the state, the organization of a Men's League for Women's Suffrage, and state-wide speaking tours of nationally known suffragists such as Anna Howard Shaw and Rev. Olympia Brown. After achieving the vote, Johnston went on to organize "registration teas" for Kansas women. At each tea was a voter registration book that the attendees were expected to sign before they left. During this time, Johnston also served as a judge of a state-wide letter-writing contest on "how the newly enfranchised women voters could use their power for the best interest of the state."

Lucy Browne Johnston died from an illness in Topeka, Kansas, in February 17, 1937. Her papers are housed at the Kansas Historical Society. 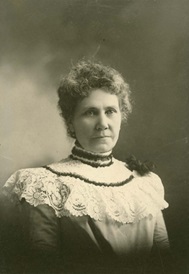