Minnie J. Grinstead (nee Johnson) was born in Crawford County, Kansas in 1869. In her late teens, she began work in the education field as a teacher while working on gaining the proper certifications. She continued teaching for a reported eleven years before turning her attention to politics. It was here that Grinstead would be destined to leave her mark on history as the first women to serve on a judiciary committee and as the first woman elected to the Kansas House of Representatives.

Her first experience in politics was in the Woman's Christian Temperance Union (WCTU) as a speaker and recruiter. Grinstead proved herself to be an especially adept public speaker. The Tiller and Toiler reported of Grinstead's speaking style that "when she gave her lecture . . . she moved her hearers at will…It was a masterly effort, and it is commendable, not simply because she is an orator, but because she lays bare the true facts." And the Liberal Democrat, after witnessing another of Grinstead's speeches, noted that "she spoke to a full house with her usual ease and charm."

Grinstead's work in the WCTU came to a close in 1918 when she decided to run as a Republican for the Seward county seat in the state House of Representatives. Grinstead ran for office with a campaign platform focused on instituting national prohibition and challenging the government's law on fixed prices. Before her campaign, Grinstead fought with success for women's right to vote in Kansas in 1912. But in 1918, Grinstead dared to further her political career and was elected to the Kansas House of Representatives. She was re-elected twice to the seat. By 1920, three more women were elected to House seats. Grinstead led the way and opened the door for her fellow women.

As a state representative, Grinstead wrote an anti-smoking bill that was similar to many that are in place today. The Wichita Beacon wrote that, "she would pass a law preventing smoking in all public places where meals are served, such as in hotel dining rooms, cafes, dining cars, drug stores and clubs." Grinstead also introduced a bill to secure funds for traveling libraries in small towns.

While Grinstead made major political progress for women, she cared for a family as well. She married Virgil Hooker Grinstead, a lawyer and district judge, in 1901. They had four children together, two of whom survived to adulthood.

In 1924, a year before her death, Grinstead was sent to the Republican National Convention as a delegate where she cast a vote in favor of Calvin Coolidge. One admirer wrote at the time: "She has long ago shown her ability as a politician—a representative of the people and speaking for them and for their interests…She has given what the country is crying for—service." Sadly, she did not serve much longer as Grinstead suffered a sudden stroke on Christmas Eve, 1925. By the next day, Minnie J. Grinstead had passed away at the age of fifty-six, having made history. 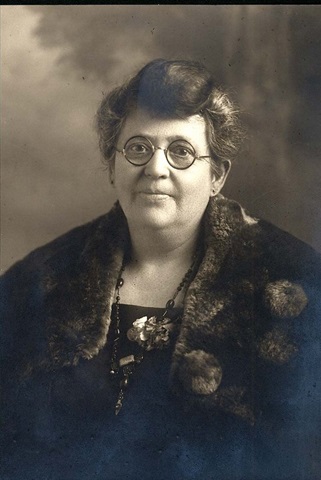