Martha Klatschken was born in Germany on December 25, 1877, to Russian Jewish parents who immigrated to America in 1883. Her father, Marcus, was a cantor, who, with wife Therese, joined millions searching for a better life. He became a successful cigar maker who could provide the security his daughter needed to pursue her campaign for women's suffrage. Though the family had settled in Boston, Martha soon made her way to New York and New Jersey where she managed to become a respected partner to notable suffragists like Maud Nathan, Rosalie Gardiner Jones and Ida Craft.

In 1909, Martha along with Dr. Emma O. Gantz, started the Progressive Woman Suffrage Society in East Orange, NJ. They held open-air meetings around the state. The first was in Orange, where Martha spoke along with Mrs. J. Borrman Wells of England.

Martha Klatschken was described in the press of her time as a short woman with a very loud voice. "The Little Corporal," as she was known, was part of the "Suffrage Army" that toured around New York State and participated in a major multi-state rally in Washington D.C. in March 1913. She made her impact as a speaker with a strong voice that could fill an auditorium. As the (The Rome Daily Sentinel (June 13, 1913) noted: "Miss Klatschken, but 5 feet tall, yet having a voice that reached a block away . . . told of the progress that had been made not only in this country, but in New Zealand, Australia and other foreign countries. Frequent applause greeted her remarks." The same account of her speech quoted her saying: "There are 50,000 women in this state alone, who are today supporting their husbands, and they at least should be given the right to vote, and have a voice at the polls."

She was among a number of Jewish women who became active in the suffrage movement, deciding that the best strategy was to join up with the already existing movement, rather than forming an exclusively Jewish effort--this despite the anti-Semitism and Christian evangelicalism of many suffragists in the early twentieth century. She also drew on her immigrant roots, speaking her native German at meetings that attracted German tenement dwellers. As one historian has written: "Jewish women emerged as national leaders of the suffragette movement. Maud Nathan and Martha Klatschken, for two, were especially well known for their oratorical abilities and organizational know-how. Their imaginative protest tactics, such as delivering a nonstop twenty-four-hour-long streetcorner lecture, or giving what is called a silent speech, whilst standing before a vacant store, helped draw attention to the cause." (Rafael Medoff, Jewish Americans and Political Participation, ABC CLIO, 2002)

Martha became involved with some of the better-known suffragists of the day. Rosalie Jones and her associates planned a "hike" from New York City to Washington. The three-week march in February 1913 was led by "General" Jones and "Colonel" Ida Craft, reinforced by "Little Corporal" Martha Klatschken and a large group of supporters, who were joined by others along the route.

It was a huge public relations success. They were followed by reporters and photographers. They had also attracted male supporters and were welcomed by male dignitaries along the way from governors to church elders. Princeton University canceled classes for their march so undergraduates could join the procession - with a snake dance. Little Corporal Klatschken found herself debating Princeton men about the topic of woman's suffrage. She said," You know, we don't object to men. It's just the opposite. We love everybody. We are doing this for the sake of men; it's a humanitarian movement."

She was part of a large suffrage rally in Washington, D.C. the day after Woodrow Wilson's inauguration. As described by The Washington Post (March 2, 1913): "Women from all parts of the country flocked into Washington yesterday and last night to participate tomorrow in the woman's suffrage pageant to emphasize on the people generally and the incoming Congress in particular, the 'nation-wide demand for an amendment to the Constitution of the United States enfranchising women.'"

On many occasions she was written about or her speeches quoted in contemporary newspapers, some of these publications far from her home:

"'Gen.' Rosalie Jones and her suffragist 'army' started a 'hike' to Albany today to take a petition to the legislature asking for woman watchers at the polls when the question of suffrage for women is voted upon in 1915…The army was strong from the standpoint of quality, but small in numbers. The veterans [included] 'Colonel' Ida Craft and 'Corporal' Martha Klatschken, who have been in every march of the suffrage pilgrims so far." - The Chicago Daily Tribune, Jan. 2, 1914

"Corporal Martha Klatschken, formerly of Gen. Rosalie Jones's Pilgrim Army, had a moist experience in the Twelfth Assembly District last year, when in a heated suffrage argument delivered from a soap box…she was silenced by bags of cold water carefully aimed and deposited upon her head." - New York Times, June 30, 1914

Despite this "moist experience," the next year she was greeted with enthusiasm. Indeed, she persisted and presumably got to vote in New York in 1917 and in a national election in 1920. A naturalized citizen, she lived in New York (Queens) in 1910 and 1920 but had relocated by 1930 to the Boston area, where she lived with the family of her friend Maud Nathan. She never married and records indicate that she died in October, 1949.

The Internet is filled with news articles that mention Martha Klatschken. Census data is contradictory in terms of her place and date of birth. The book Jewish Americans and Political Participation by Rafael Medoff (ABC CLIO, 2002) was helpful and this writer was pointed in that direction by a website authored by Aria Whitebeam: accessed online at https://www.darkmoon.me/2016/jewish-first-wave-feminists/ . 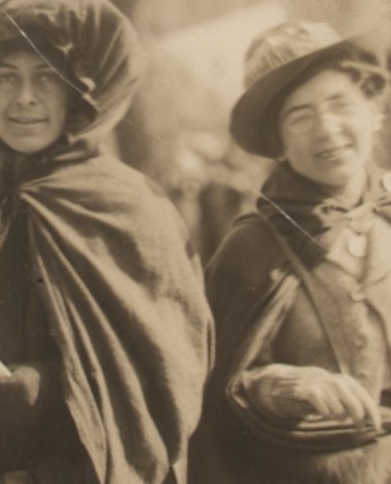