Henrietta Jackson Wells Livermore was the fourth of five children born to Henry J. and Maria Goodnow Wells on May 22, 1864 in San Francisco. Her father was a lawyer, judge and served in the Massachusetts Assembly and the State Senate in the 1880's. She was educated at Harvard Grammar School, Cambridge Latin School, and received a BA from Wellesley College in 1887 and a Master's in 1893. On October 21, 1890 she married Arthur L. Livermore, a lawyer. The couple moved to Yonkers, New York in 1893 and resided there until their deaths. They had two sons, Henry W. and Russell B., and the latter served in the New York State Assembly from 1921 through 1922.

Livermore held officer positions in suffrage organizations on the national, state and local level. She was chair of the National American Women's Suffrage Association's (NAWSA) Literature Committee, which was responsible for creating, publishing and distributing suffrage literature throughout the country. She was manager of the Suffrage Schools created by NAWSA in 1916 to train suffragists in organizing and advocacy methods for the federal amendment. In 1917 she was elected to NAWSA's Board of Directors and in 1919 elected as one of eight directors of transition team for NAWSA's merger into the League of Women Voters. Beginning in 1910 Livermore held several posts in the New York State Woman Suffrage Association including vice president and a member of the Executive Board and she served as well as president of the Yonkers (NY) Suffrage Association.

Livermore traveled widely and became a lecturer on the problems of South American countries. In 1922, President Harding designated her a member of the U.S. commission at the Brazilian Centennial Exposition.

In addition to her political activities Livermore was a tennis champion at Wellesley, as well as a founder and first president of the Women's University Club. She also served terms as president of the New York branch of the Association of Collegiate Alumnae, the Wellesley Club of New York, the Yonkers Fairview Garden Club that provided garden plots for boys and girls, the Yonkers Child Study Club, and was chair of Yonkers Civic League's educational committee.

Harriet Wells Livermore died at home on October 14, 1933. In a 1929 interview Livermore said "I am a great believer in what women can do in government. I look upon women as a vast undeveloped reservoir of power . . . before they can realize their potential power, they must think independently and stand firmly on the principles which they see clearly."

Leonard, John William, Woman's Who's Who of America: a Biographical Dictionary of Contemporary Women of the United States and Canada, 1914-1915 (New York: American Common Wealth Co., 1914), 494. 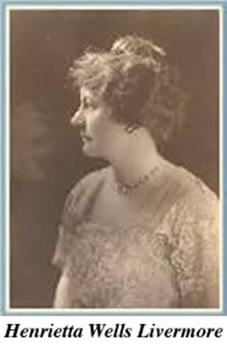