Advisory Council of the Congressional Union, President of the New Era League

Lillian Virginia Harris Coffin was born in Illinois in 1868. Her father was born in Ireland and her mother was born in England. She married her husband Horace in 1889 and after her marriage she was frequently known as Mrs. Horace Coffin. She and Horace had one daughter named Marguerite and were long time residents of Mill Valley. Marguerite married in a celebrated event noted by many local newspapers in 1911. Lillian became an opera singer and had a lengthy history of involvement in the woman suffrage movement. In 1905 she served as chair of the civic section of the California Club. Gayle Gullett has noted that she "grew into a suffragist in the California Club, that it was in the club that her interest was aroused in juvenile courts, child labor and the duties of a citizen. . ." and it was in the California Club that she felt compelled to take "direct action" for the suffrage cause. In her earlier years, Coffin lived in San Francisco at 1720 Pacific Avenue and she was a Vice-President of the California Equal Suffrage Association (CESA). The CESA was associated with the National Women's Suffrage Association as it was created to increase outreach to younger women to encourage them to be more politically active. The CESA was also affiliated with the International Suffrage Alliance. Coffin served as Vice-President while Mrs. Elizabeth Lowe Watson from San Jose served at President of the CESA.

In 1906 Coffin created the San Francisco Equal Suffrage League (SFESL). This organization consolidated a number of suffrage clubs in the Bay Area. Connections between the suffrage movement and clubwomen were common in California in the early Twentieth century, and Coffin moved in between both of these progressive worlds. At an October 1906 suffrage convention in California, Coffin advocated for her political strategy to encourage the use of images by suffragists as affluent and feminine women to counter negative stereotypes of the women who supported suffrage. Coffin's ability to attract endorsements from all of California's political parties with the exception of the Republicans was especially celebrated at that this convention. Mary Garnage was chosen as president of the SFESL and in 1906 Coffin was named the head of the state central committee of the of CESA. On October 4-5, 1907 she represented the state central committee at the annual convention of CESA that was held in Oakland. She was also a fundraiser for sanitation during this time period.

In August 1908 Harris was pictured marching alongside Mrs. Theodore Pinther Jr. and Mrs. Theodore Pinther Sr. in a call for women's suffrage. This march in downtown Oakland was widely respected among suffragists. In 1909 she helped lead a meeting of the Oakland Suffrage Amendment League at the Key Route Hotel. In March that year she also attempted to organize a women's campaign against graft. She made an effort to mobilize union women and promised to lend aid in the fight against corruption.

Coffin was also associated with the temperance movement. In 1909 she spoke at the Women's Christian Temperance Union's Congress of Reform in Berkeley, California. In 1910 she spoke at a gathering of the Political Equality League headquarters where she encouraged women to become more politically active. Harris Coffin is credited with being a pivotal activist who helped California women earn their franchise in 1911. That same year she created the Club Woman's Franchise League. In 1912 she served as a member of a delegation of women who met with the police commissioner in San Francisco to demand women police officers.

Lillian Harris Coffin was a nationally respected suffragist who was highly involved with the Congressional Union committee under NAWSA. In 1914 she worked with Lucy Burns who had created a CU office at 45 Stockton Street in San Francisco. In 1915 she served as a representative to the pivotal conference of women voters organized by Alice Paul to take place concurrently with the Panama-Pacific Exposition in San Francisco. Alva Belmont served as chairman of this important gathering and Lillian Harris Coffin assisted her on the leadership team alongside Mrs. Phoebe A. Hearst. The Le Grande Observer noted that this convention was the "largest convention of women voters ever held." Coffin Harris also served as a member of the Congressional Union's Advisory Council and the CU considered her to be one of the most prominent clubwomen in the state of California.

In the 1916 presidential election she split with other suffragists in September and endorsed Woodrow Wilson during his reelection campaign, stating:

No one can question my fidelity to woman suffrage. I was associated with it for many years and always have been deeply interested in securing it for the rest of the women in this country. I favor a federal amendment on account of its educational status but I wish emphatically to say that I do not approve the present methods adopted by some women's organizations to defeat the reelection of President Wilson. Although I have devoted a large part of my life to furthering the interests of woman's suffrage, yet filled with the responsibility that goes with the title American citizens, my duty to my country is paramount. I am impelled to make this statement by the fact that, having always shared in the activities of the progressive party and stood constantly for progressive legislation, I cannot consent to anything that will endanger the furtherance of the constructive legislation of the Wilson administration. Such an administration, with its genuine progressive tendencies, is the most likely to do more for woman suffrage when its best interests are understood than if it were now to go on record for a federal amendment under pressure. I feel that suffrage by federal amendment will come. Haven't we seen in the Wilson administration a disposition to do that which is most daring when it comes to serving the people? Strength for the woman's cause certainly rests with the strongest force in the nation and that force most assuredly is Woodrow Wilson.

The last known record for Lillian Harris Coffin appeared in 1955 when she was living in San Rafael at age 85. Her husband Horace died at age 86 in 1951 and is buried in Colma in San Mateo County, California. In 1958 Lillian publicly endorsed Caspar Weinberger for Attorney General of the state of California. In 1959 she was still participating in the San Francisco Tea Club. Lillian Harris Coffin passed away on March 25, 1968 in San Francisco. 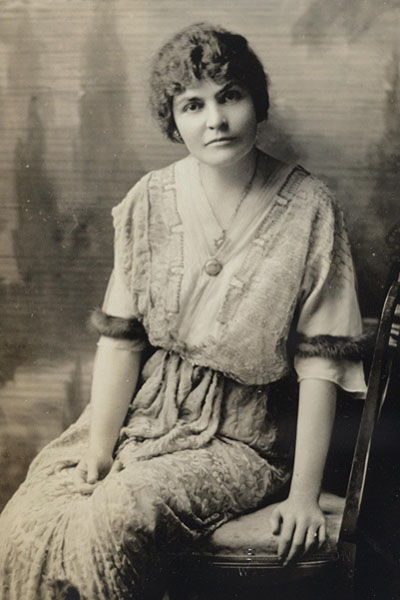 13)Laura Bride Power, ed. Western Woman: Official Journal of the California and Washington Equal Suffrage League, 2, No. 9. July 20, 1907.(includes a large picture of her under the name: Mrs. Horace Coffin).