Member of the Board of Directors for the California Equal Suffrage League, Psychologist

Dr. Kate Brousseau was born on April 24th 1862 in Ypsilanti, Michigan to Judge Julius Brousseau, an attorney and Democratic politician, and Carrie Yakeley Brousseau, a housewife. There is no record of her marrying or having children. She lived with her family in the Brousseau Mansion in the Bunker Hill neighborhood of Los Angeles and remained a resident of Los Angeles until her death. She was the valedictorian of the first graduating class of the State Normal School at Los Angeles (now University of California, Los Angeles) in 1884, and served on the faculty from 1897 to 1903. She achieved a doctorate in psychology from the University of Paris in 1904. From 1907 to 1928, Brousseau was a professor of psychology at Oakland's Mills College, eventually becoming the chair of the psychology department.

Dr. Brousseau was a member of the Northern California branch of the College Equal Suffrage League (CESL), which was an organization that was formed to attract young, college educated women to the suffrage movement. This organization was heavily tied to the National American Woman Suffrage Association. In May 1911, she was elected to the board of directors of the CESL. She was also the head of the literature committee for the CESL, which was in charge of printing and distributing reading material to inform people about suffrage. Brousseau distributed pamphlets by many prominent suffragists such as Alice Stone Blackwell, Jane Addams, Carrie Chapman Catt, and more. As a part of the Woman's City Club, she attended suffrage rallies in Los Angeles. Additionally, Brousseau was a member of the Association of College Alumnae (now the AAUW), an organization which worked to improve standards of education for women. The Association of College Alumnae officially endorsed women's suffrage in 1915.

Kate Brousseau was unique in the fact that much of her work for suffrage and women's equality was centered around college and education for women. As head of the Literature committee for the CESL, she sent a leaflet called "Why the Teacher Should be a Suffragist" by Fannie McLean to teachers throughout the entire state of California. Additionally, she advocated for the establishment of smaller, local branches in order to reach more voters. She was also unlike many other suffragists at the time because she advocated for the voting rights of African Americans. She even had some correspondence with W.E.B. Du Bois. In her book L'education des Negres aux etats-Unis, Brousseau recognized the "perpetual danger posed by the suffrage of illiterate voters in a representative government," and advocated for increased schooling for all children, but especially black children in former slave states. Interestingly, Kate Brousseau was registered as a Democrat for her entire life, even though the Democratic Party's platform at the time did not align with many of the more progressive causes that she fought for.

In 1917, Kate Brousseau went to France under government orders, so that she could help women, children, and shell-shocked soldiers. She was the first Californian woman to be sent to France during World War I and ended up serving in the French Army as the acting director of a soldiers' home. While serving in the army, she took up photography, and captured many of the war scenes that she saw. For her service in World War I, she was decorated by the French minister of war with the "Médaille Commémorative de la Guerre 1914-1918".

After the war, Brousseau remained in France for a few years, examining the mental faculties of streetcar workers, primarily women who had taken over these jobs in place of their husbands, sons, or brothers. She devised a test to see if people were mentally and emotionally fit to operate a streetcar. This test was so successful that she encouraged factories to employ the same test for their workers. Eventually, she returned to her teaching job at Mills College. She published another book concerning the psychology of people with Down Syndrome, Mongolism: A Study of the Physical and Mental Characteristics of Mongolian Imbeciles. After retiring from Mills College in 1928, she returned to Los Angeles. She died in Los Angeles on July 9th 1938, and is buried in Evergreen Cemetery.

4)Brousseau, Kate. The Education of Blacks in the United States. Paris: F. Alcan, 1904.

15)Puncheon, Katharine E. "Report of the Committee on Credentials." The Journal of the Association of Collegiate Alumnae, vol. 9, Jan. 1916, p. 16, https://books.google.com/books?id=chpOAAAAMAAJ 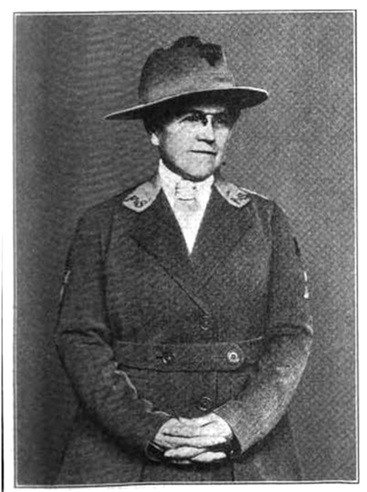