By Tammy McMenomy; Condensed by Kay Sanders, both for the Nevada Women's History Project

Born and raised in Iowa, Sadie Dotson married Horton Hurst, gave birth to two sons, lost her husband, and moved with her sons to Nevada in the early 1900s. She became a busy "clubwoman" and served as president of the Washoe County Equal Franchise Society in 1914. In April 1916, the Sparks Tribune refers to a meeting held at the home of Sadie D. Hurst, president of the Women's Citizen Club. It was an informal meeting with Miss Elizabeth Hauser and Miss Walker who were representing Mrs. Carrie Chapman Catt, president of the National American Woman Suffrage Association. They spoke on non-partisan methods of the National Society and on the great progress of equal suffrage throughout the world.

Mrs. Hurst decided to run for the Nevada Assembly as a Washoe County candidate in the 1918 elections. She was endorsed by the Club Women of Reno. The press wrote little about Mrs. Hurst, nor did she campaign very much. On Election Day, 1918, Mrs. Sadie D. Hurst became the first female legislator in Nevada.

On January 23, 1919, Mrs. Hurst introduced Assembly Joint Concurrent Resolution 2 which was the resolution amending the Constitution of the United States, granting the right of suffrage to women. The resolution was adopted. Not much was written after the session about Mrs. Hurst until the Special Session which was called in February of 1920 to ratify the Federal Suffrage Amendment. Because Mrs. Hurst was the only woman representative in the legislature, Speaker Fitzgerald asked her to preside over the Assembly during the passage of the resolution. It passed the Assembly 25 to 1.

A pioneer in politics, Sadie Hurst paved the way for women to run for office in Nevada. Losing her bid for reelection, Mrs. Hurst moved to California with her family in 1922. She died in Pasadena at age 94. 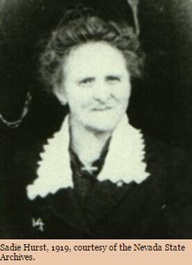 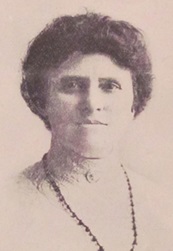