By Lynn Bremer; condensed by Kay Sanders, both for the Nevada Women's History Project.

Mary Stoddard came to Virginia City, NV in 1870, staying with an uncle and aunt, General Christopher Batterman and his wife, Lucy. Her early years had been spent in Connecticut, where she was born in 1845, married young, gave birth to a daughter, and worked as an assistant in a public school.

Also in 1875, her mother and oldest daughter came from Connecticut to live with her. The family moved to Austin, Nevada, where Doten took her teacher's examination and earned her first grade certificate. She resumed her teaching career there due to financial necessity.

In December 1883, she applied to the Reno public schools for a teaching position. She was hired and became one of Reno's pioneer teachers with a career that lasted from 1884 to 1903. During that time, she taught most of the subjects offered at Reno High School and served as vice-principal.

In addition to her teaching career, Doten was active in the Nevada women's suffrage movement. In the May 18, 1895 edition of the Reno Evening Gazette, is a report of the organization and first public meeting of the state woman suffrage committee, in which Misses Susan B. Anthony, Hannah Clapp and Mary Doten were in attendance and made remarks. Her independence and working experience made her an outspoken suffragist.

Lynn Bremer, From This Land of Sagebrush and Alkalai: The Collected Writings of Mary Stoddard Doten. Black Rock Press and Nevada Historical Society. 2014. 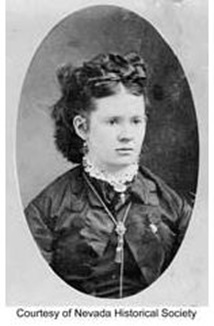