Biographical Sketch of Bird May Wilson

Bird May Wilson grew up in Indiana. After studying to be a Court Reporter in Chicago, she moved to San Francisco where she worked for Federal Judge William W. Morrow, a prominent legislator and jurist. When in his employ, Bird graduated from Hastings Law School with honors. She was admitted to the practice of law before both Federal and State courts in California.

Bird moved to Nevada shortly after the San Francisco earthquake and was licensed to practice law on June 28, 1906, just the seventh woman to be admitted to the profession in Nevada. She began practice in Manhattan, Nevada, where she concentrated on general civil, contract and mining law. Bird Wilson prospered there and became a stock broker, owned a ranch in Indian Springs and had mining interests in Round Mountain, Tonopah and Goldfield.

Bird Wilson was interested in the plight of women and children. She lobbied in both the 1913 and 1915 Nevada State Legislatures for suffrage and for the rights on women and children. During the suffrage campaign on 1913-14, she was vice president of the Equal Franchise Society and in charge of organizing suffrage workers in Southern Nevada. The Equal Franchise Society distributed over 20,000 copies of her suffrage campaign pamphlet, Women under Nevada Laws, which Bird wrote to inform citizens that although women had no representation in government, they were required to pay taxes the same as men.

Application for Membership to The National Society of the Daughters of the American Revolution. Washington, D.C. completed by Bird May Wilson, on May 31, 1910 in Goldfield, Nevada. 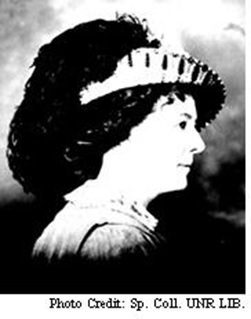