Eliza Frissell was born in Peru, Massachusetts to Captain Augustus Frissell and Laura Mack Frissell, September 20, 1835. She married Henry Alvin Messenger and had three children with him. Her daughter named Jennie Eliza was born in 1864 and died in 1865. Eliza's two sons, H Burdette, born in 1863, and Robert, born in 1870, lived well into the 1900s.

Eliza and her family moved to Caroline County, Maryland in June 1881. While in Caroline county, she was an active member of the community. Her connection to Christianity and advocacy, bolstered in seminary school from her Massachusetts home, was furthered with her membership to the Woman's Christian Temperance Union. The WCTU advocated for various political causes, including women's suffrage, equal pay for equal work, and the protection of women and children in the private and public spheres of life. The organization also advocated for the prohibition of alcohol, as it was part of the temperance movement. Eliza was the president of her chapter of the Woman's Christian Temperance Union in Caroline County in 1892, and served in other roles in later years for the organization, such as treasurer and vice president. She attended annual conventions, and organized events for the WCTU in her community. She was in contact with the WCTU state organizer, Annie R. Stuart, in 1893, indicating that she played an active role in the Union, both locally and on a larger scale.

Her husband, Henry, died January 21, 1888. After her husband died, she worked as a seamstress to support herself and her family. Eliza went on to represent Caroline County at a suffragist convention, as she was listed as a state representative in the Maryland section of the History of Women Suffrage (Husted Harper)[LINK]. The convention she attended was most likely the 1906 suffrage convention held in honor of Susan B. Anthony's eighty-sixth birthday in Baltimore. Over 150 women from this convention lobbied Congress members for the cause of suffrage.

Eliza Messenger died of pneumonia in her home on April 25, 1911. The funeral was held in the Methodist Protestant Church in Caroline County. 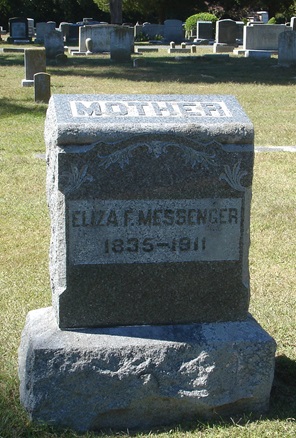 Eliza Messenger is mentioned as a county representative suffragist in Ida Husted Harper, ed., Chapter XIX: Maryland, Part I, in History of Woman Suffrage, vol. 6: 1900-1920, (New York, NY: National American Woman Suffrage Association, 1922), p. 252 [LINK]. Information about her family and her life can be found in census record from 1900-1910 through FamilySearch.org. Articles in reference to Eliza Messenger and her life in Caroline County, as well as her involvement in the WCTU and her obituary can be found dating from 1892 to 1911 in The Denton Journal, accessed via the Maryland State Archives Digital Newspaper Collection. Articles from The Denton Journal include: "Eighty-Sixth Birthday: Celebrations of Woman Suffragists in Honor of Miss Anthony," Denton Journal, March 24, 1906. "Dashes Here and There," Denton Journal, October 11, 1890. "W.C.T.U. Meeting," Denton Journal, October 8th, 1892. "Federalsburg," Denton Journal, April 29 1893. "W.C.T.U. Meeting," Denton Journal, September 23, 1893. "Full of Years, They Rest: Death of a Number of Well-known People - Obituary," Denton Journal, April 29 1911. Eliza Messenger's involvement in Mount Holyoke College is recorded in Mount Holyoke College, General Catalogue of Officers & Students (Hadley, MA, Mount Holyoke) 1911. Information about her family, birth date and the image of the gravestone are available at H, Dee, and Brenda Massey. "Eliza Frissell Messenger." Find A Grave.com. https://www.findagrave.com/cgi-bin/fg.cgi?page=gr&%3BGRid=119774421&%3Bref=acom. Vital records with Eliza Messenger's confirmed birth date can be found in Peru, Massachusetts, Vital Records of Peru, Massachusetts, to the Year 1850 (Peru, MA, 1902).

My research process for this project involved intense consideration and reconsideration. The initial dearth of digitized information on my suffragist resulted from a misunderstanding of her life and impact in the suffrage movement. Due to her death in 1911, I disregarded the records and information on Eliza Frissell Messenger, and searched for a woman who would have lived to participate in the suffrage movement of the 1910s and 1920s. This fantasy of my suffragist acted as a red herring for my research, and led me astray from the actual information. In order to conduct good research, it's important to keep an open mind and understand that initial assumptions may be proven incorrect in the face of new information; conversely, research tools and digital archives can provide different ways to address information, leading to revelations in research and diverse ways in which research can be developed.

A major hurdle for me to address was my suffragist's death date: She died in 1911, of what I later found to be pneumonia. Due to this, I thought Elizabeth Frissell Messenger of Caroline County was not the woman I was looking for. The woman I wanted to find shared her name, but was younger, unmarried, and alive to see the passage of the 19th amendment (I thought). I believed this because we were tasked to find and research suffragists and potential silent sentinels, yet the pickets on the White House didn't begin until 1917. A woman who died in 1911 would not have participated, and thus, was most likely not my suffragist. I was also looking for a young woman because she was listed as a "Miss" in the Women and Social Movements US 1600-2000 database, indicating that she was unmarried and most likely younger. This woman was a fantasy, however. As Scott discusses in "Fantasy Echo," "Fantasy is more or less synonymous with imagination, and it is taken to be subject to rational, intentional control; one directs one's imagination purposively to achieve a coherent aim, that of writing oneself or one's group into history, writing the history of individuals or groups" (287). I misunderstood her involvement in the suffrage movement and, as a result, decided to search for a person who I imagined would have been more involved in suffrage: an obscure and young suffragist, with a different last name due to marriage. I may have imagined her as young because her involvement in the suffrage movement is reminiscent to current feminist activism, and many feminists participating are younger women. I may have been projecting a bit of my own personality onto her as well, as she and I have similar names and grew up in similar places. However, that subjectivity led my research astray.

As I searched for the wrong person, I encountered many dead ends. And so, I turned to local sources in Caroline County. I called the county government, and was forwarded to the public library in Federalsburg. After a productive phone call and an inquiry email, I had the aid of the Caroline county librarians. Within several hours, they unearthed many references of an E. F. Messenger and an Eliza F. Messenger in The Denton Journal from the 1880s up until an obituary in 1911. There was an article that also discussed a suffrage convention in 1906 in honor of Susan B. Anthony's eighty-sixth birthday which was most likely the convention my suffragist attended in order to be listed in the initial source which placed her on the list for research. Thus, Eliza Frissell Messenger was an option again, and my research was refocused on the older working woman in Federalsburg.

A strategy that worked very well for me was to search through the newspaperarchive.org for my suffragist (using Eliza Messenger, E. F. Messenger, etc) in The Denton Journal. The pages contain word-searchable transcript and would pull up specific pages and dates when searched with a name and location. I couldn't read the paper, though, because it was a paid feature. I navigated this setback by then going to the Maryland State Archive. By using the MSA newspaper database to pull up the specific pages to read which I found via newspaperarchive.org, I was able to find the full pages and limit the amount of reading I would have had to do for the same information. This situation reminds me of an aspect of researching with digital tools which Solberg discusses, "Digital tools and digitized resources extend, remediate, and transform our research environments; these transformations, in turn, open up possibilities for new kinds of interaction with, and new movements through, the archive" (54-55). I found that, by cross-referencing these two websites together, I was able to move more fluidly within a dense database. Hence, certain tools used together can lighten the load of research, and "transform" the database experience.

In trying to "find" Eliza Messenger, I had to address my own feelings and assumptions toward the research. It involved considering and reconsidering my preconceptions, embracing flexibility, and using research tools creatively to find the information I needed. Overall, I learned about the subjective nature of research; I must address my ideas towards the research and keep an open mind to new information, and diverse ways to gather that information.