Rose E. Morgan was born on June 15, 1859 in Oswego, New York. Her parents were immigrants from Ireland and England. French married Hayes Clifton French, who was also an English immigrant, on August 5, 1878 in Cleveland, Ohio. By 1880, the couple had moved to California where they raised their two daughters: Victoria and Davida. Hayes Clifton French passed away in 1902.

French was very active in local reform organizations in San Francisco. She was a leader in the Woman's Christian Temperance Union and served on the Board of Directors of the California Girls' Training Home. French advocated for better conditions for women in prison and also worked to have women appointed as matrons in the city prison. As President of the Women's Federation of Public Good in San Francisco, French fought against the white slave trade and advocated for the protection for young girls against violence and sexual assault. She insisted on the full prosecution of assailants. French expressed frustration with her inability to gain justice for women and girls. In a 1911 speech before the Equal Suffrage League of Detroit French explained how she turned this frustration into a commitment to fight for women's suffrage: "If every woman knew the other woman's story she would hold her hand across the chasm to her . . . We have the brotherhood of man-what we need sadly is the sisterhood of woman . . . I believe this can only be accomplished by means of political equality." She joined the suffrage movement to fight for women's political rights.

After the outbreak of World War I, French turned her attention to the peace effort. In 1915, she traveled to Holland as a delegate to the Women's Peace Congress representing the National American Woman Suffrage Association and the California Suffrage Association. The Women's Peace Congress not only worked for peace but for an end to the suffering resulting from the effects of war. In 1919, French was in Budapest, Hungary serving as a representative of the Women's International League for Peace and Freedom.

French continued her reform work and peace activism until the end of her life. She passed away on January 9, 1929, in Los Angeles, California from fatal car crash injuries. She was seventy years old at the time of her death. 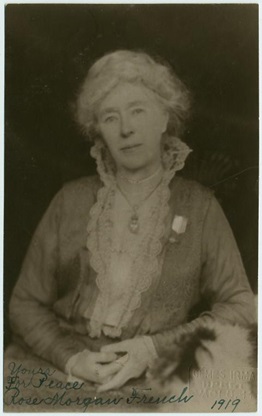