State Superintendent of the California WTCU

Sarah M. Severance was born in Cazenovia, New York on September 22, 1835, to parents Rhoda E. Johnson and Apollos Severance. She was educated at the Oneida Conference Seminary, which is known today as Cazenovia College. By the age of sixteen, she had already dedicated herself to teaching and was intensely passionate in advocating for women's suffrage and education equality for women. She graduated from the Oneida Conference Seminary in 1857 and became the preceptress to Ellington Academy in Chautauqua County, New York.

In 1862, Severance moved to California and taught at the San Jose Institute for five years. She then moved to Gilroy, where she set up a private school called The Miss Sarah M. Severance Gilroy Seminary in 1868. Severance operated the school for 18 years before she moved back to San Jose upon the school's closure. Shortly after, a new school opened in Gilroy named Severance Elementary School in her honor.

Although Severance began her suffrage activism later in life, she became one of the leading suffragists in California. In an autobiographical newspaper article, she stated: "As soon as my latent suffrage sentiment blossomed and became recognized, it immediately fruited." Severance joined the Woman's Christian Temperance Union (WCTU) and was elected State Superintendent of the California WCTU in 1886. She was recognized as a leader within the organization and had a great passion for helping women gain the vote and equality in education. On this period of her life, she commented: "I am only ashamed that I did not help before." Severance was able to halt the growing division within the group over nuanced strategic differences and unite the women for the common cause of suffrage. While acting as the State Superintendent at the WTCU, Severance traveled to Sacramento with a petition and drafts of three bills asking for Municipal and School Suffrage, including the right to hold every educational office. In 1889, the School Suffrage Bill passed with 24 ayes, noes. Severance became the editor of the WCTU's newly published weekly paper's suffrage section in 1890. The same year, she campaigned for the office of State Superintendent of Public Instruction of California and ran on the Prohibition ticket. Although she was not elected, she received over 6,400 votes and was the first woman in the state to run for this position.

Much of Severance's early work for the WCTU was focused on school suffrage for women. In the fight for school suffrage, Severance penned the satirical play "An Extra Session of California Legislature" in which gender roles were reversed and female legislators debated whether or not to grant men school suffrage. Once called the "the most convincing humorist in the West," Severance made good use of humor and satire in her speeches in appealing for suffrage. Funded by the WCTU, Severance toured around the state promoting school suffrage in the mid 1890s and was wildly successful. One review of her speech concluded that if there was anyone in the room who still did not believe in granting women suffrage, "it must be because they did not hear Miss Severance." Her lecture tour ended in victory when a school suffrage bill passed through the California assembly, yet this victory was cut short when Governor Gage vetoed the bill in 1899. This defeat did not dissuade the WCTU or Severance, who gave him "a good roasting" along with other suffragists at the annual convention of the Equal Suffrage clubs of Santa Clara County.

Known as the "lioness of orators," Severance was incredibly popular on her lecture tours, often generating incredible applause and support from her audiences. She even won a popularity contest put on by her the WCTU, the Suffrage Amendment League, and the Political Equality Club. She deconstructed and satirized the arguments of her opponents by illuminating the hypocrisy in glorifying their own democratic principles. In one speech, Severance proclaimed: "What must be the effect upon men in thus denying to woman what they would rather die than lose themselves — the power of self-government?" In one reply to a man who argued that that no one should vote who could not back it with bullets, Severance remarked: "I could have fought better myself."

Although Severance was dedicated to the mission of the WTCU as well as her religious beliefs, she acknowledged that there was some disunity between members of the organization; in one interview given in 1896, she stated: "For some time, there was a division of sentiment, but I have always believed that tolerance and reason are our only weapons, and that it is bad Christianity, as well as bad policy, to refuse to opponents the fairness which we demand for ourselves, so there has never been other than friendly disagreement within our ranks, and even that has now ceased." Severance was devoted to the empowerment for women that the WTCU stood for. She passionately stated: "We are one, so far as I know, in recognizing the power of the ballot and the duty of woman to secure a choice in her environment, a chance to use her talents to promote what she knows is right. I have come to feel that it is the first Christian duty of women to secure the means to do their duty; that he who can promote right and will not is just as good as she who cannot because of political bonds, and does not want the chance."

Severance continued to fight for suffrage until 1911, when the 19th amendment was ratified in California. Upon this victory, Severance wrote: "The war has ended and we have captured the flag." She lived to witness the federal ratification of the 19th amendment in August of 1920, which granted women the right to vote in every state. After advocating tirelessly for over 25 years, Severance's activism for women's rights came to an end when she died in 1928. Severance is buried in Oak Hill Memorial Park, San Jose.

10)"Sarah M. Severance's Campaign for State Superintendent of Public Instruction, 1890." Her Hat Was In the Ring! U.S. Women Who Ran For Political Office Before 1920, Accessed 18 Sep. 2017, http://www.herhatwasinthering.org/biography.php?id=4932 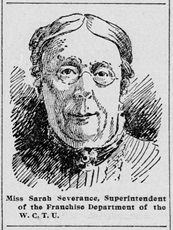