Margaret Elizabeth Crozier was born May 7, 1851, in Knoxville, TN. Lizzie grew up in a home with many books, which likely was the seedbed of her lifelong passion for education, especially of women. She received formal education at Covenant of Visitation School in Georgetown, D. C. and at the Episcopal Female Institute in Columbia, Tennessee.

Lizzie Crozier married William Baxter French when she was twenty-one and was widowed nineteen months later. She bore one child, William Williams French.

From 1885-1890, Lizzie with her sisters, Lucy and Mary, operated a school for "young ladies and children," with an emphasis on public speaking. In 1887, Lizzie published "A Manual of Elocution" for use with the students. Eventually, French took on the role of principal.

A passionate woman and an accomplished public speaker, Lizzie founded and participated in a number of women's organizations, clubs, and circles (women's gatherings) concerned with improving her community, and thus, listed her occupation as suffragist. She started The Woman's Educational and Industrial Union to promote social reform in Knoxville that established a home for elderly women with no means of support. She was the first woman to address the Knoxville City Council, where she advocated for the appointment of a female police matron for women offenders. She was the first woman to speak before the Tennessee Bar Association, making the statement: "I wish I could say 'Fellow citizens', but since I am not accepted as a citizen by the government, I must say 'Citizens and Fellow Servants.'"

French "aggressively" lobbied the State Teachers' Association in 1889 calling for coeducation at the University of Tennessee in Knoxville, which began admitting women in 1892. She was a member of the National Woman's Party, one time chair of the Tennessee branch, and organized the Knoxville Equal Suffrage Association in 1910.

In 1911, French organized the Writer's Club in Knoxville to encourage women to share their beliefs and opinions through letter writing campaigns. The organization eventually became the Knoxville branch of the League of American Penswomen.

She worked and traveled tirelessly to debate and stump for women's rights. After Tennessee ratified the 19th Amendment, she ran for Knoxville City Council in 1923. In May of 1924, French was elected president of the Tennessee Equal Suffrage Association.

She died on May 14, 1926, while in Washington, D.C., to lobby for a bill that would benefit workingwomen and to attend the dedication of a room in the National Woman's Party Building established in her honor. 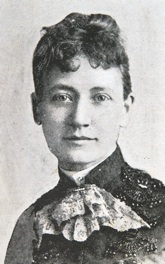