Elizabeth Lowe Watson was born c. 1843 in Solon, Ohio. Throughout her life, Watson exemplified a true renaissance woman; she was not just a suffragist, but a minister, lecturer, writer, activist, and farmer. She began her career as a preacher and public speaker at an early age. By the time she was fourteen, she drew large crowds giving inspirational speeches about religion. As she developed as an orator, Watson also began preaching about abolitionism, temperance, peace, and women's rights. Watson lived in Leon, New York and worked as a local preacher until 1861, when she married oil tycoon Jonathan Watson in Titusville, Pennsylvania. After the Civil War, the couple lived in Rochester, New York, where Watson cared for their four children and five stepchildren, largely suspending her public work. However, she maintained her professional and spiritual life as an ordained minister for the Progressive Spiritualists of Rochester.

Around 1880, Watson and her family moved to California, settling on a 25-acre working fruit farm in Santa Clara affectionately called Sunnybrae. The move to Northern California initiated the most productive and politically active period of Watson's life. In 1882, she embarked on a hugely successful speaking tour in Australia, solidifying her reputation as a respected orator. Watson became a preacher for the First Spiritual Union of San Francisco in 1896 and served as a pastor for the city's Religious and Philosophical Society, regularly filling the Metropolitan Temples 1,200-person capacity. In 1905, she also became a published author, penning a collection of poetry and sermons called "Song and Sermon."

After her husband died in 1892, Watson intensified her participation in the women's suffrage movement. While living in Rochester, Watson connected with a strong network of suffragists, and she maintained these connections after her move to California. In 1895, Watson hosted a luncheon for Susan B. Anthony and several other suffragists at Sunnybrae, where the women gave speeches for several hundred people from neighboring ranches. Watson and Anthony continued their friendship and exchanged correspondence until Anthony's death in 1906.

In 1910, Watson became the President of the California Equal Suffrage Association, a statewide federation that acted as a coordinating structure for the promotion of women's suffrage. As President, she gave countless speeches advocating for women's suffrage, prompting Clara Foltz to deem her the "leading woman orator of the day." Her impassioned lectures captivated audiences; in a 1911 speech at the Sacramento First Methodist Church, Watson proclaimed, "The women who want the ballot, and will not rest until they have it, are the women who have felt the heartthrobs of the world's deep misery.… There was never laid a stone in the foundation of this republic but that woman had a part in it." Despite political challenges, she had great confidence in the inevitability of equality; at a 1910 celebration of Women's Day in San Francisco, Watson assured attendees that "woman's emancipation is as sure as the law of gravity."

Watson served as President of the California Equal Suffrage Association until shortly after California women earned the right to vote on October 10, 1911. At the California Equal Suffrage Association's 1912 Convention, Watson celebrated the victory, but emphasized women's continued responsibilities. In her speech, she declared, "It is to be hoped that we will continue to work for the extension of woman suffrage until every state in the union is really free." Fortunately, Watson lived to see this dream realized, passing away in 1927 in Santa Clara, California.

Severance, Sarah M. "ELIZABETH LOWE WATSON." In The Progressive Woman, September 1911, in The Coming Nation: A Magazine For The Creators Of The New Social Order, Issues 51-52, ed. Josephine Conger Kaneko.

"WATSON, Elizabeth Lowe." In Woman's Who's Who of America: A Biographical Dictionary of Contemporary Women of the United States and Canada, 1914-1915, ed. John William Leonard [LINK] 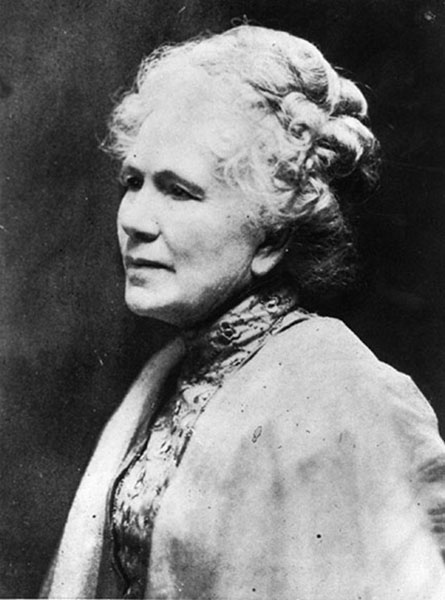