Born into a well-respected family, Alice Moore McComas began her journey into the world on June 18, 1850 in Paris, Illinois. Her father hailed from a patriotic, well-educated Virginia family, and her mother from a prominent Kentucky family of jurists. Thus, McComas's inquisitive nature and future successes may in part be attributed to her family background and upbringing. She spent her childhood years notorious for being especially outspoken for a girl, which was considered socially unacceptable. She was a strong student, particularly enjoying composition. Alice Moore went on to attend the Convent of St. Mary in Indiana, and later married Charles C. McComas in 1871.

McComas's adult life demonstrated a habit of frequent relocation from state-to-state. By 1877, she moved to Kansas alongside her husband and two daughters due to financial difficulties. She then began to pursue writing under a pseudonym to make money for her family. After spending a decade in Kansas, McComas made her way to Los Angeles, where she finally published work under her real name. In fact, in 1891, McComas published an article titled "The Marriage Partnership" in The Woman's Tribune that discusses her opposition to views that support the subjugation and limitation of women as mere housewives. She went on to claim that "in marriage there should be an equal partnership in love, home and finance" - a bold statement at the time.

However, years before the publishing of that article, McComas became highly involved with the Women's Suffrage Association of Los Angeles, which had formed in 1885 with the purpose of educating women on the importance of the women's suffrage battle. In 1889, McComas wrote a piece in The Woman's Journal about the progression of women's suffrage movements within California, and her WSA chapter's involvement with this effort. She also served as the Los Angeles chapter's secretary. By 1891, McComas became the chapter's President, as well as the Vice President of the Ladies' Annex to the Los Angeles Chamber of Commerce. She also acted as treasurer of the Southern California Association and a member of the board of directors for the Women's Industrial Union during this time. As President of the WSA, McComas organized the first county suffrage convention in California, and later on, in July 1898, she represented the chapter at Women's Day at Willamette Chautauqua Valley alongside thirty-nine other national women's organizations. Alice Moore McComas died in November 1919, just managing to live through the passing of the 19th Amendment that granted women the right to vote. 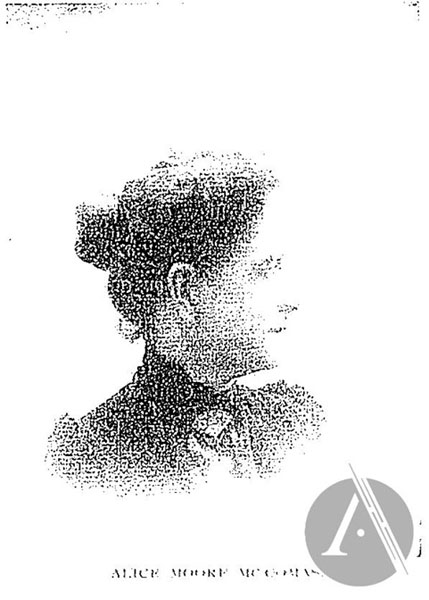