Mary Hutcheson Page was born in 1860 in Columbus, Ohio to Lucretia Deshler Hutcheson and Joseph Hutcheson. She spent part of her childhood in Europe and became an orphan in her teens. Page was one of the earliest women students at the Massachusetts Institute of Technology, where she studied chemistry and biology as a special student. She married George Hyde Page in 1890 and had four children: Hutcheson, Anne, Katharine, and Richmond. A resident of Brookline, Massachusetts, she was active in women's suffrage organizations from the 1890s until her retirement and move to California in 1918. After her husband's death in 1923, she returned to Massachusetts. She died in 1940.

Page specialized in raising funds and drawing women to suffrage organizations. Maud Wood Park declared that she had an "actual genius" for engaging selected people in suffrage work. Not an eager public speaker, she excelled at acquiring money and assistance from individual contacts. As chairman of the Industrial committee of the Massachusetts Equal Suffrage Association, she acquired Massachusetts labor unions' endorsement for woman suffrage.

Page wrote articles in suffrage-focused and wider-interest periodicals. She examined women's current and historical roles in society in "The Subjection of Sex" in The Woman's Journal and "The Position of Women" in the one-time periodical Ye Odde Number. One of the earliest American suffragists to embrace British militant suffrage tactics, she hosted Emmeline Pankhurst at her home in 1909, and in the same year wrote a letter to the editor of the Boston Herald emphasizing the respectability and social prominence of English suffragists. Drawing on her interest in British suffragism, Page pushed MWSA and BESAGG to open a storefront in Boston, transitioning from scheduled formal events to informal public action. She became head of the Votes For Women Committee, a joint project of MWSA and BESAGG which sent members to travel among towns giving speeches, a more radical and effective tactic of gaining support which signaled a shift in approach by Massachusetts suffrage groups.

J. E. Purdy & Co., Boston. "Mrs. Mary Hutcheson Page of Boston, Mass. Mrs. Page is President of the Brookline Woman Suffrage Association. She is one of the most active workers for the national suffrage amendment." Photograph. Library of Congress, National Woman's Party Records, Group I, Container I:155, Folder: Page, Mary. 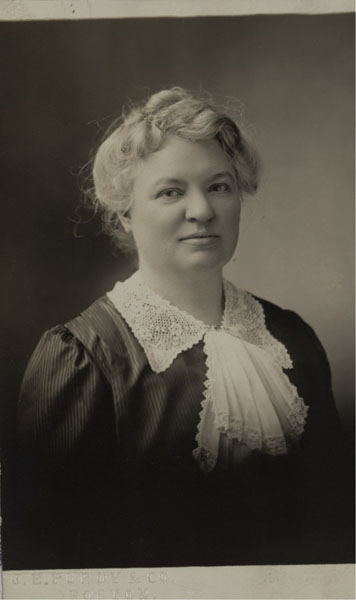