Rosella Bayhi, nee Rosella Sypher, was born on February 20, 1851 in New Orleans, Louisiana. She was the daughter of William N. Sypher and Georgiana (Richardson) Sypher. She married Joseph Hippolyte Bayhi, a bookkeeper, on December 5, 1867. Together, they had nine children, of which only four survived (Ethel, Sidonia, Zoe, and Frederick). Rosella died on November 19, 1928, in New Orleans.

Rosella Bayhi was an active member of several suffrage organizations and the New Orleans community at large. The earliest record of her suffrage work dates back to February of 1913, which is found in a newspaper article about local suffragists who planned to travel to Washington, D.C. to march with the National American Woman's Suffrage Association in the suffrage parade just before Woodrow Wilson's inauguration. Bayhi was the chairman of the "On to Washington" movement in New Orleans, and she made arrangements for three other women and herself to travel to Washington D.C. for the event. As a member of the Era Club, a club founded for the purpose of advancing women's suffrage, Bayhi carried an Era Club banner at this march, which can be seen in the attached photograph.

Prior to 1913, there were no state organizations for women's suffrage in Louisiana. As stated in a newspaper article about the founding of the Woman Suffrage, Rosella Bayhi was an active member of the organization from the very beginning, seeing as she was already involved in suffrage work at the time. The Party's platform originally supported an amendment to the state constitution, but eventually branched out to support the federal suffrage amendment. Rosella Bayhi was elected chairman of ward organization for the Woman Suffrage Party in June of 1913. During the same time, she also served as chairman of the propaganda work. As the organization grew to over three hundred members, Bayhi was responsible for organizing one of the Party's larger outdoor gatherings. In 1920, Bayhi was a part of the Party's Joint Ratification Committee, and lobbied the state legislature in Baton Rouge to ratify the 19th Amendment.

At the first open-air gathering of the Joint Ratification Committee, Bayhi spoke to the crowd, and her daughters, Sidonia and Zoe, were also in attendance. Bayhi continued to speak at these rallies throughout her career in activism. At a rally in June of 1913, Bayhi spoke about why the Party was holding these "open-air" meetings, how important it was to teach young and old alike about the necessity for suffrage, and gave a brief history of the Suffrage movement. These rallies gave Bayhi a platform to defend the women's vote, often providing carefully thought out counterarguments to defend her position. One article from August 1913 states, "Mrs. Bayhi very clearly used standing arguments 'against votes for women.' Women are too hysterical, it is claimed, but Mrs. Bayhi gave a picture of the Chicago Board of Trade and showed that women had nothing on men in that respect" (The Daily Picayune August 31, 1913).

Starting in 1914, Bayhi started writing short opinion pieces that got published in The Times-Picayune as part of the "Letters to the Editor." The topics ranged from pleading the Louisiana legislature to ratify suffrage, exclaiming, "Wake up, Louisiana!" to a written defense of picketing. Mrs. Bayhi esposed the hypocrisy within the system, writing about silent protesters, she stated , "Mobs were allowed to set upon [the silent protesters], tear their clothes; man-handle them and even strike them. Then the powers that be, having offered no protection, allowed the mob to go free, but place the women in jail! How long, oh men, will you let women suffer for this cause?" (The Times-Picayune, November 3, 1917). It should be noted that Mrs. Bayhi, in an article in 1919, following the passage of the 19th Amendment, made the argument that African American women should also be afforded the right to vote.

Following the ratification of the 19th Amendment, Mrs. Bayhi remained politically active, working alongside colleagues to organize the Saxon-Merrick Club, a club "for the political advancement of women." Even in September 1928, two months before her death, Bayhi was found at a rally in which she spoke in order to convince Democrats to vote for Herbert Hoover for President. 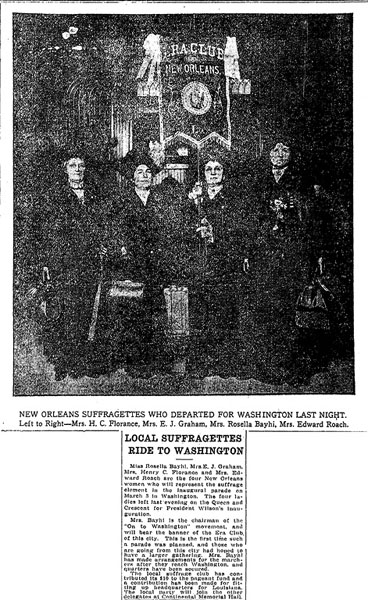 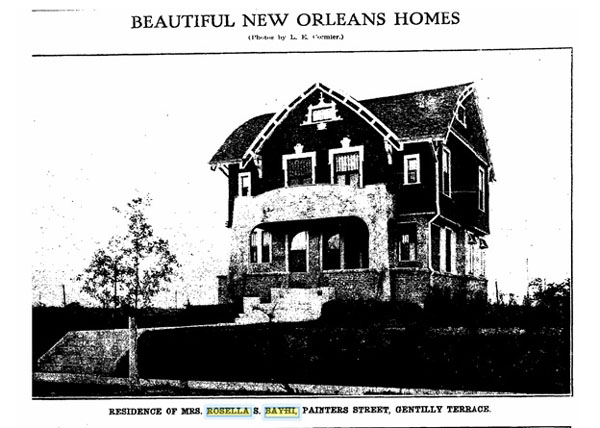