Carrie Mary Hill, nee Lonell, was born in September 1857 in Iowa, to James and Mary Lonell. She married Homer M. Hill in 1884, and remained married to him until her death at 91 in Seattle, Washington on December 21, 1948. She lived in Seattle for most of her life.

During her career as a suffragist, Carrie Hill primarily advocated for using women's clubs to organize and unite women in their campaign for equal suffrage. In part this was due to her belief that clubs, and not committees, would best yield the money needed for the lobbyists' efforts -- such as traveling costs for speakers -- through dues and donations from members.

Carrie Hill's suffrage work likely began around 1880, for she was known as a "thirty-year veteran of suffrage campaigns" when she was working with the Washington Equal Suffrage Association (WESA) in Olympia, WA in January 1909, helping to organize female lobbyists. She founded The Woman's Industrial Club in Seattle in July, 1895. The club's stated goal was to bring "mutual improvement, bettering of physical conditions, and the elevation of tastes" to its members, who were all, except for Hill, housewives; its activities included practicing elocution and discussing current events.

Hill was also a longtime member of the Woman's Century Club, which, like the Woman's Industrial Club, championed intellectual and cultural development for women. For example, in June 1898, the Century Club was busy preparing a pamphlet of the laws of Washington State concerning and affecting women. Hill also published a paper about club interests called Washington Women.

Hill was mentioned several times in the Seattle Post-Intelligencer for her work in the club community and for women's suffrage. Among these mentions, the earliest was in July of 1895, in an article about a series of assemblies in Chautauqua, Washington collectively known as Women's Week. On the first day of this Women's Week, she presided over a convention in which over one hundred representatives of the women's clubs of Seattle, Tacoma, Olympia, and Everett, WA listened to speakers read papers such as "The Club as a Factor in Woman's Life" and "The History of Women's Clubs." On the second day, she herself gave a paper titled "Equal Suffrage." She returned at least once more to Women's Week conventions in Chautauqua; in August of 1898 she spoke at the Baptist Young People's Union on the importance of suffrage clubs. Earlier that year she had been elected president of the Washington Equal Suffrage Association, and would go on to hold the position until November 1900.

In an article in February, 1899 mentioning her re-election to the presidency of WESA, the Post-Intelligencer gave the following description of Hill: 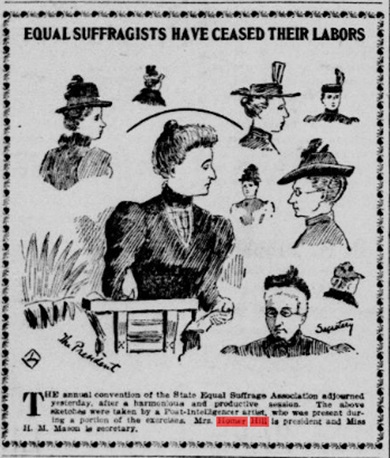 "Mrs. Hill is a fair and frail little woman who shows wondrous adaptability as a president of such gatherings. She listens patiently and her whole facial expression shifts in sympathy with each sentence uttered. Her eyebrows lift in mild surprise or in smiling encouragement, or they come down and knit in a line in the center."

Like her husband, Homer Hill, Carrie Hill was a prohibitionist, and moreover a prominent member in the Woman's Christian Temperance Union. However, during the campaign for suffrage in 1909, she did not speak out in support of prohibition, likely due to the belief of some suffragists that it would decrease male support for women's suffrage.

Once described as a Populist, Carrie Hill said that she was proud to be named such, and expressed gratitude toward the Populist party for helping the suffrage movement. Multiple accounts described her as humble, hard-working, and energetic. Though her efforts to win suffrage could not prevent the failure of Washington's 1898 referendum on a women's suffrage bill, she ended up helping lead the 1909 suffrage campaign in Washington alongside Emma Smith DeVoe, which ultimately proved successful when Washington women won the vote in February 1910.