Claire Hubbard Gurney was born on June 16, 1867 in Roxbury, Massachusetts, to Moses Nason Hubbard and Mary Elizabeth Hubbard. She was educated through Boston Public Schools, and went on to attend the School of Expression (now Curry College) in downtown Boston. Additionally, she studied languages and literature under private tutors, including Henry Hudson, a prominent lecturer on Shakespeare. She married Herbert J. Gurney is 1889, in Roxbury, Massachusetts, and spent her life with him in Quincy, Massachusetts.

Claire was passionate about women’s suffrage, rights, and organization, lecturing, writing, and literature. She wrote stories for children’s magazines, gave lectures on literature, and was involved in drama and theater—she was a dramatic reader and was involved in theater productions in her community. She published multiple stories, one of which was titled “A Stop-Over Christmas”, and was published in the children’s magazine St. Nicholas in 1908, as well as in a Christmas book for children. In her free time, she enjoyed canoeing, walking, and outdoor sports. She belonged to the Unitarian church and was a member of the Unitarian Sunday School.

Claire Hubbard Gurney was a prominent member of the women’s suffrage movement, and dedicated much of her time to supporting Women’s Clubs and organizations. In the 1900s-1920s, she was a member of the Quincy Women’s Club, Friday Club, Pickwick Club, and Massachusetts State Federation, and served as president of the Quincy Women’s Club and Massachusetts State Federation. After serving as President of the Quincy Women’s Club for two years, she became the fourth vice-president of the General Federation of Women’s Club, and worked on the Literature and Library Extension Committee. She often appeared in the General Women’s Federation Magazine. In the 1920s, she served as Chairman of the Women’s National Committee for Law Enforcement. Throughout her work, Claire demonstrated dedication to upholding American ideals, viewing America as the “arbiter of human history.” She often inspired people to vote and otherwise fulfill their civil duties in her lectures and written work. She was also dedicated to increasing representation of women in law enforcement, education, and health reform. She believed strongly in the importance of conferences, to gather and mobilize action, for women to “make actual the ideals held before us”. She was a speaker at many events and meetings as a part of the Women’s Clubs and beyond, and gave lectures on Women’s rights, citizenship, and literature. During World War I, she addressed women and encouraged them to do their part in the war effort, as women, mothers, and patriots, for older women, this meant facilitating the establishment of home for men at war, and giving up their own luxuries to donate to the war efforts. Gurney was also enthusiastic about resettlement and facilitating relationships between those in Women’s Clubs and immigrants; she worked to provide opportunities for immigrants to America to learn English and connect with Women’s Club members.

In 1940 Gurney was living in Quincy, Massachusetts with her husband Herbert and her sister Elizabeth, who was ten years her junior. She died in February, 1949 in Boston at the age of 91. Her obituary noted that she was “past president of the Massachusetts State Federation of Women’s Clubs.” 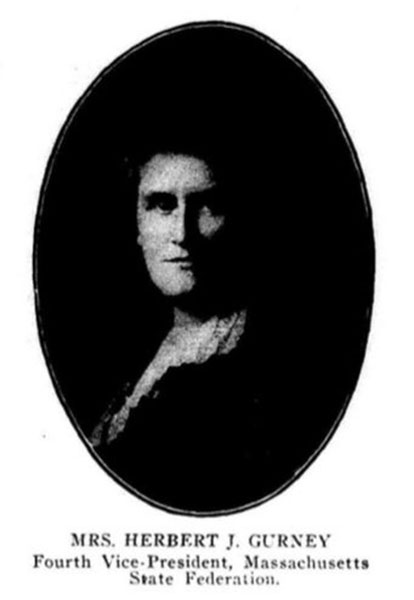