Mrs. Frederick Eggert, also known as Elizabeth Avery Eggert, was born on April 7, 1848 in Chipping Norton, Oxfordshire, England to Thomas E. Avery and Selina Slater,. At the age of 5, Elizabeth, her parents, and sibling Henry Avery emigrated from Liverpool to New York on September 20, 1853 and settled in Meriden, Connecticut. There Elizabeth's family grew in size, with the births of four siblings, William Eben, Thomas E., Selina, and Rose May.

Elizabeth attemnded the Ipswich (Mass.) Female Seminary and later obtained a degree. as a homeopathic doctor in 1868.. She also joined the Kansas Homeopathic Medical Society in 1872, being the first woman to do so. It was in Lawrence, Kansas that she met her husband, Frederick Eggert. Elizabeth married Frederick on September 1, 1873 at the Lawrence First Methodist Episcopal Church. Frederick was born on May 30, 1843 in Milwaukee, Wisconsin, to Bavarian immigrant parents. The couple moved to Portland, Oregon and ran very successful businesses including the Eggert, Young & Company, a boot and shoe company. Frederick also purchased a significant amount of land in Hood River Valley, a river basin in northern Oregon, where he and Elizabeth were named pioneers of the Hood River Pioneer Association. According to the Hood River Glacier, the association classified anyone who purchased and developed land in Hood River Valley prior to officially becoming a city. Elizabeth remained married to Frederick until his death on April 26, 1918 in Portland, Oregon at the age of 75. They were married for 45 years and had no children.

According to several US censuses ranging from 1900-1910 from the Ancestry Database, it is implied that Elizabeth gave up her career as a homeopathic doctor and pursued other activities such as supporting Frederick's business and participating in various state and local organizations. Elizabeth became the vice-president of Eggert, Young & Company in Portland while Frederick expanded his business into the Pacific Northwest during the 1880s. In 1906, Elizabeth was part of a board led by President Abigail Scott Duniway, the "mother of suffrage in Oregon," of the Oregon State Federation of Women's Clubs according to Charles H. Carey's History of Oregon, Volume 2. In 1912, Elizabeth was a chairman of a committee to bring the Portland Woman's Club into the campaign to promote suffrage. She also served as President of the Portland Woman's Club for a period. Ultimately, Elizabeth and her fellow suffragists were successful in passing state legislation on November 30, 1912. that granted women in Oregon the right of suffrage.

At the same time that Elizabeth was part of many organizations dedicated to suffrage and equal rights, she was also an active member of the Women's Association of the First Congregational Church. In 1923, she published the Review of the Work and Activities of the Ladies' Aid Organizations of the First Congregational Church, Portland, Oregon, 1851-1923, an overview of the work that the Ladies' Aid Organizations achieved in the time period of 1851 to 1923.

Even though Elizabeth stopped practicing medicine for years, she still enjoyed participating in medical humanitarian causes. With the wealth acquired from her family's shoe business, Mrs. Eggert sponsored various health programs around the world. These programs included health inspections of students in public schools and emergency aid for French women and children following World War I. Mrs. Eggert also expanded her influence in medical philanthropy by entering the American Women's Hospitals and Medical Women's International Association. Mrs. Eggert garnered so much respect in the medical philanthropy field that she received the honorary title of President of the Doernbecher Hospital Guild.

After her husband Frederick's death in 1918, Elizabeth remained in Portland until her death on November 20, 1935.

The first database used was Women and Social Movements in the United States. This database is specifically for the documentation of the history of women in social movements in the U.S from 1600 to 2000. Within this database, there were 2 primary full text sources referencing Mrs. Frederick Eggert. The first source was The History of the General Federation of Women's Clubs for the First Twenty-Two Years of Its Organization by Mary I. Wood. This book was first published in 1912 by the Authority of the Biennal Convention at Cincinnati. The second source within this database was The History of Woman Suffrage, vol.6: 1900-1920 edited by Ida Husted Harper. This book was published in 1922 by Fowler and Wells, which identifies key players in woman suffrage from a variety of states between 1900-1920.

The second database used to find more information about Mrs. Frederick Eggert was the Ancestry Library. This database includes billions of records of individuals from US federal censuses, immigration records, City Directories, etc. The first source found was a family tree of a Mr. Frederick Eggert. The second source used was the family tree of Elizabeth Avery Eggert. Other sources found and utilized in this database were several US City Directories, 1822-1995. The final source used in this database was the 1910 United States Federal Census.

The last source found on Elizabeth Eggert was a book written by her and published in 1923, Review of the Work and Activities of the Ladies' Aid Organizations of the First Congregational Church, Portland, Oregon, 1851-1923.

Thus, as I had obtained some information about Mrs. Frederick Eggert, I moved on to the Ancestry Library database, as it was obvious that Mrs. Frederick Eggert was her husband's name. Within the Ancestry database, I first did a search on her husband Mr. Frederick Eggert, with the information I found in the 2 sources from the Women and Social Movements in the United States database. By combining these facts together, I managed to find her husband's family tree and timeline, where I saw that he was married to Elizabeth Avery. To ensure that this was the same Mrs. Frederick Eggert, I examined her own family tree and timeline and came to the conclusion that this was the same person based on the similarities I found from all the sources I examined so far. One interesting fact I found in her family tree was that she was not a native US citizen, but was born in Oxfordshire, England and arrived in the US in 1855, at age 7.

After examining Chronicling America, I moved to a broad google search on Elizabeth Eggert, where I found a book she wrote in 1923. The book, Review of the Works and Activities of the Ladies' Aid Organizations of the First Congregational Church, Portland, Oregon, 1851-1923 was based on her experiences as she served in the administration of the Ladies' Aid Society of Portland's First Congregational Church.

Thus, as a clearer picture of the life of Elizabeth Eggert developed, certain things stood out. While some sources only briefly mentioned her name, small details such as date or location greatly assisted in finding the correct Mrs. Frederick Eggert. With the research on Elizabeth Eggert so far, she has clearly been an active participant of several organizations promoting both woman suffrage and public health, heavily involved in the state government of Oregon. 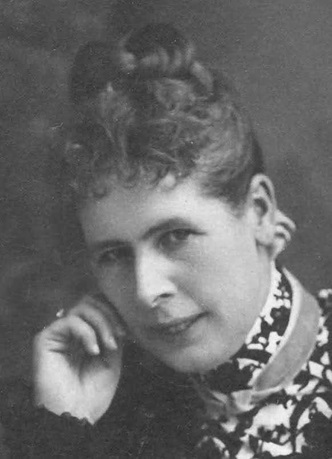